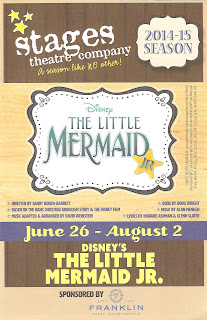 A bunch of my cousins from Northern Minnesota were in town last weekend for a visit. We did the usual touristy stuff (Mall of America, Water Park of America, Como Zoo, Target Field), but when it came to showing them my favorite part of living in "the Cities" (as Minneapolis, St. Paul, and the surrounding communities are known in out-state Minnesota), it meant only one thing: theater! Since the group included lots of little ones, I took the opportunity to make my first visit to Stages Theatre Company in Hopkins for their production of The Little Mermaid, Jr. With a familiar and beloved story and music, enthusiastic performances by the talented young cast, and just over an hour running time, it was a hit with my group, the little ones aged 3 to 10 as well as the adults.

I saw the full Little Mermaid musical at Chanhassen last year (you can read about that here), but this is Little Mermaid, Jr. Which means that it was trimmed to a shorter running time. The good news is that the songs that were cut from the full-length musical are the new ones that did not appear in the movie, so all of the old favorites are still intact - "Part of That World," "Under the Sea," "Kiss the Girl," and the like. And while things wrap up fairly quickly at the end, the condensed story works well. The movie is only 83 minutes long, so it's quite possible to tell this story in an hour or so.

Having never been to Stages before, I was surprised to find that almost the entire cast is made up of teenagers. And such talented, enthusiastic teenagers! Everyone in the large ensemble is so engaged and present, and performs with great energy. As Ariel, Tori Tedeschi Adams gives an effervescent performance, with a strong and lovely voice. Ellie Turk is adorable as her sidekick Flounder. Adults Reginald D. Haney (with a deep voice and regal presence as King Titan) and Brittany Parker (quite fabulous as sea witch Ursula) anchor this young cast, and director Sandy Boren-Barrett does a wonderful job keeping everything moving. Including the quick set changes, in which large pieces are rolled on and off stage or turned around to reveal various underwater treasures (prompting the 5-year-old in my group to ask, "are they changing the channel now?"). Both sets and costumes are bright, colorful, engaging to the eye, and create an underwater feel (set design by Benjamin Olsen, costume design by Samantha Fromm Haddow).

Stages Theatre Company's The Little Mermaid, Jr is a charming, entertaining, and brisk production. If you have little ones, or suddenly find yourself with little ones to entertain, this is definitely a great choice, and a great way to expose kids to theater at an early age. Continuing through August 2 (including a trip to Bigfork this weekend).