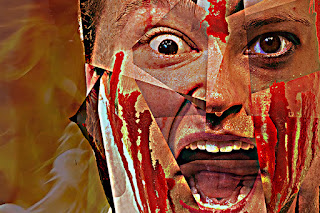 Summary: A super creepy cool retelling of the Frankenstein story, in which a young boy becomes obsessed with the book to an unhealthy degree.

Highlights: Victor's story is told in a nonlinear fashion, and just like the original Dr. Frankenstein (and Victor himself), we need to put the pieces together to come up with one disturbing whole. Victor is often the narrator of his own story, and we see flashes back to his childhood mixed with scenes from the present at a dark and scary cabin. Scenes often move from one to the other in the middle of a conversation, with characters disappearing and appearing as if by magic. Tyler Olsen wrote, directed, and designed the show (a remount from last year's Twin Cities' Horror Festival), and has created a terrifying and starkly beautiful world. The whole show is done in the dark with hand-held lights and one floor light, flashed on and off at appropriate times to create some really beautiful images with contrasting light and dark. The sound design adds to the creep factor, from the moment you walk into the theater to the sound of buzzing flies. The excellent cast is fully committed to the creation of this world, centered around a raw and emotional performance by Miles Duffey as Victor, with the nimble Joanna Harmon as his girlfriend, Jay Kistler as a childhood friend, and Garrett Vollmer and Noah Bremer as some pretty scary monsters. The whole thing is really well done and yes, there is blood, and some pretty messy clean-up. Moral of the story: don't let your children read Frankenstein.