"Right, Wrong, or Bomb! A Dating Musical" by Backyard to Broadway Productions at Illusion Theater 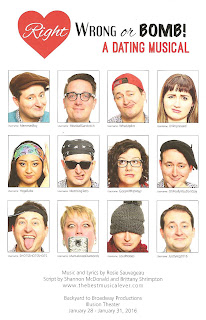 "The protagonist, Jill, professionally successful but socially awkward, finds herself in a state of perpetual singleness." Upon reading this description of the new original musical Right, Wrong, or Bomb! A Dating Musical, I was afraid someone had written a musical about me. But after seeing it last night, I was reassured that it's not really about me, because this Jill, unlike the musical Jill, is focused on more than just finding a man. Still, the musical has moments that ring true about the pressure that society, friends, and family put on us to find a mate, and the strange way that many people go about it in the internet age. There's nothing too deep or revelatory here, but Right, Wrong, or Bomb! is a fun, funny, and entertaining musical with a pleasing score and wonderful heartfelt performances.

We meet Jill (an appealing and relatable Colleen Somerville Leeman) on the morning after a disastrous New Year's Eve wedding, hungover and waking up on the couch with her Ryan Gosling body pillow. To prevent this frequent occurrence, she decides to try online dating. Supporting her in this venture are her friends - happily single waitress Haley (Katharine Strom, Twin Cities Theater Bloggers nominee for Favorite Actor in a Musical), and happily committed yogi Maya (Stephanie Bertumen). Mother Sally (an entertainingly campy Debbie Swanson) is also single and enjoying online dating, leading to many cringe-worthy moments between mother and daughter. But before Jill can pursue love with her many varied potential matches (all played by David Beukema in two brilliant displays of character quick-change), she needs to get over her crush on work friend Rob (C. Ryan Shipley).

The score has many catchy, clever songs, and some sweetly melodic songs as well. Composer/lyricist Rosie Sauvageau accompanies the cast on piano, and this simple arrangement works nicely and allows the cast to be unmiked, which sounds beautiful in Illusion's theater space. I love that it's not bombastic and over-song as some musicals can be, in particular Colleen shows beautiful restraint and has some lovely moments. It feels like a small-scale musical, in a good way, and with a little trimming would work great as a short and sweet 90-minute-no-intermission show.

Shannon McDonald and Brittany Shrimpton's book is funny and very up to the moment, although I was hoping for a bit more depth of character. As my companion pointed out, despite there being four women in this show it fails the Bechdel test because all they talk about is men. And Maya's girlfriend, but still, all they talk about and seem to be concerned about is their romantic relationships, or lack thereof. The tagline mentions Jill is "professionally successful" but she only seems interested in work as a place she can moon over Rob. It would be nice to see more of that side of Jill, or really anything besides her obsession with finding a mate.

Despite a few flaws, I really enjoyed Right, Wrong, or Bomb! A Dating Musical and am happy to support a new original musical created entirely by women, and local women to boot (including direction by one of the funniest women in the Twin Cities, Shanan Custer). I hope they continue to develop it and I look forward to seeing it again someday. In the meantime, the show continues this weekend only with some shows already sold out, so act fast!