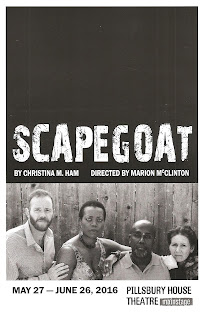 The new play Scapegoat by local playwright Christina Ham (whose work can be seen on several stages around the Cities this spring) explores a little known part of American history, the Elaine, Arkansas race riot of 1919, which led to the landmark Supreme Court case Moore v. Dempsey. The full story of events (in which hundreds of black sharecroppers were killed by white mobs in response to their attempts to unionize) is tragic, epic, and complicated. Rather than try to tell the whole story, the play focuses on two sharecropper families, one white and one black, and the unspeakably horrible murder that ties them together. The second act takes place in the present time when two interracial couples from New York visit the area while on vacation and are shocked to discover the history, each of them affected in different ways. Similar to Clybourne Park, Scapegoat looks at a racial conflict of the past from the perspective of that time, and also looking back at it from today in our supposedly post-racial society, showing how much things have changed, and how much they haven't.

Scapegoat almost feels like two completely different plays. The first act is heavy, intense, and sobering. The second act, while still pretty intense, is much lighter in tone, the laughter feeling like a healing release to the terror of the first act. But don't get too comfortable, because despite the happy foursome on holiday feel, there's a deeper undercurrent of racial tension that ties it to the first act. In 1919 Arkansas, we meet black sharecroppers Virgil and Effie who, despite suffering a terrible loss, are planning to organize with their fellow sharecroppers to demand fair payment for the work that they do. White sharecroppers Ora and Uly (what fantastic names in this play!) are also struggling to get by and feel threatened, causing Uly to inform the authorities on Virgil's plans. It all feels hopeless and tragic, although there is a hint at connection between the two women. In the second act the couples change partners for the present day Southern vacation (which one of them decided driving through the South would be a fun relaxing holiday?!). These long-married interracial couples (with children named Egypt and Kenya for one couple, Satchel and Christian for the other) think they're beyond race with their modern mixed lives, but it doesn't take long in the South for them to remember their history. Each one of the four characters has a different reaction to finding out the specific history of Elaine. The different coupling makes for some really interesting juxtapositions with the first act, especially when the present-day characters try to imagine what they would have done in that long-ago past, when we the audience know exactly how it would have played out.

I just can't say enough about this cast. Jennifer Blagen, Dan Hopman, James A. Williams, and Regina Marie Williams are all wonderful, each creating two distinct yet somehow related characters in the past and the present. They find the layers in these complex characters, bringing out the tragedy or humor called for in the moment, and work beautifully together under director Marion McClinton.

The design of this show is excellent, without being so flashy it overpowers the story. Trevor Bowen has designed authentic looking period garb for the poor sharecroppers, with such added details as pants that have been split with a piece added, and a dress literally made out of a burlap sack. Then in the second act, he has clothed the actors in chic and comfy travel wear appropriate for the well-to-do on holiday. Dean Holzman's versatile set includes the outlines of two sharecropper cabins in the first act, with subtle differences to show the differences in the two families. A fun-to-watch transformation during intermission turns them into identical hotel rooms in the second act, complete with recognizable coffee pot and corded telephone (where else besides a hotel room do you find that anymore?). Michael Wangen's lighting design is especially effective in the first act with the changing light of the plantation, and credit must be given to sound designer Katharine Horowitz for the truly terrifying opening moments.

Scapegoat is one of three plays (along with Ten Thousand Things' closing soon The Changlings and the upcoming Le Switch at the Jungle) developed at the Playwrights' Center making its local world premiere this spring. I recently visited the Playwrights' Center with my fellow Twin Cities Theater Bloggers (more about that in a later blog post), and was truly impressed with the work that they do that allows new plays like this to happen. Plays that tell important stories of our past that inform our present. Scapegoat is a history lesson come to life in a sobering, powerful, and entertaining way (continuing through June 26 at Pillsbury House Theatre, with all performances pay-what-you-can).