"Wait Until Dark" at Lyric Arts 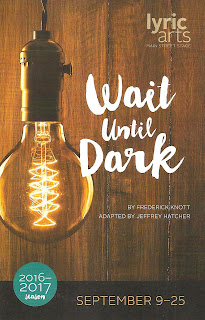 Anoka's Lyric Arts Main Street Stage opens their 2016-2017 season with an updated version of the 1960s thriller Wait Until Dark. Living on the north side of the Twin Cities, it's a pretty easy jaunt up Highway 10 to Anoka, and I've come to enjoy the trip. Lyric Arts may be a community theater in the suburbs, housed in an old movie theater in charming downtown Anoka, but much of what you'll see there is as good as anything you could see on a professional stage in the Twin Cities. Wait Until Dark is one such example. It's a technically challenging show, with the very specific "dark" and fights and suspense and all, and this team pulls it off beautifully. I was literally on the edge of my seat with my hands over my mouth, terrified of the sounds coming from the stage as we sat in complete and utter darkness. If you're a Lyric Arts fan, or have never been, you don't want to miss this one, especially if you're on the north end of town. You may need to sleep with the light on for a night or two, but it's worth it.

Having never seen the original version of Frederick Knott's 1966 play, I can't tell you what spin locally and nationally renowned playwright and screenwriter Jeffrey Hatcher has put on it with his adaptation. But I am of the opinion that Jeffrey Hatcher makes everything better, smarter, funnier, so I'm going to assume that's what he did (I'm also looking forward to seeing his adaptation of Dr. Jekyll and Mr. Hyde at Theatre in the Round this weekend). Whether the credit goes to Mr. Knott or Mr. Hatcher or both, this Wait Until Dark is a thrillingly creepy suspense story. And even better - the hero of the story is not just a woman, but a blind woman! Hindered neither by her disability nor her gender (this is 1966, remember), using her intellect, courage, and physical strength, Susan figures out what's going on and saves herself and her husband from some pretty serious consequences. Hooray!

The events begin when Susan's photographer husband Sam brings home a doll in his travel case, and claims he doesn't know where it came from. The doll contains something precious, and when its owner(s) come to find it, serious trouble ensues. Yes the plot is a bit convoluted with the doll and the train and the phone calls and the blinds and the various bad guys in play, but hold on, because it's worth the ride. Sam is away when the bad guys show up, and Susan has no one but herself, her remaining strengthened four senses, and the endearingly bratty neighbor girl to get her out of it. She comes up with a plan that involves removing fuses to pitch the basement apartment into utter darkness, putting her at an advantage over her sighted attacker.

Director Scott Ford creates just the right tone and pace (I love well-used silence in theater, and there's much of that here). The six-person cast is strong, particularly Kelly Matthews as Susan. Not only does she have the technical part down, convincingly maneuvering her way around the apartment hands out, feeling the furniture and counting her steps, but she also conveys Susan's feelings of terror, desperation, and determination. You get the feeling Susan was almost waiting for a challenge like this, to prove to herself that she could live up to it. The other standout in the cast is Eric Knutson as the baddest of the bad guys. He's so frighteningly good at playing this cruel and monstrous man that if I ever ran into him on the street, I'd have to fight the urge to run away in terror. Also good are Mark Palmer as the police sergeant, Brandon Osero as Sam, Mark Deel as an army buddy of Sam's, and young Valerie Heideman, a braided and bespectacled scene-stealer as Gloria.

Mucho kudos to both Kelly and Eric for the incredible fight scenes, which are conducted mostly in the dark so much of it is just sounds, but every time a light flashes they are spot on in their position and emotion. Because when the word "dark" is in the title of the play, you know lighting plays a crucial role. Matt McNabb has done a fantastic job designing the very important light, darkness, and shadows of this creepy world, from the light streaming through the blinds, to the red photographer's bulb, to the flash of light from a briefly lit match. Mark Koski's basement apartment set is equally fantastic, with ground level windows through which passersby can be seen and stairs descending to an apartment with several distinct, detailed, and realistic areas (although I wish he had found a better spot for the all important safe than freestanding in the living room, but that's nitpicking). Jason Hobbie's sound design completes the technical feat, creating the soundscape that is everything in Susan's sightless world.

Lyric Arts' thrilling and chilling production of Wait Until Dark continues through September 25. If you think you're not afraid of the dark, this show might make you change your mind.