"Dr. Jekyll and Mr. Hyde" at Theatre in the Round 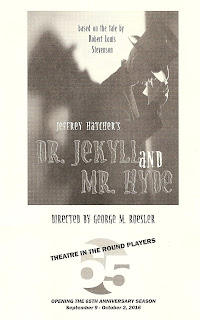 The longest-running theater in Minneapolis, Theatre in the Round is opening their 65th season with Dr. Jekyll and Mr. Hyde, the familiar story of the doctor who turns into a sociopath. An intriguing feature of this adaptation by local playwright Jeffrey Hatcher (whose adaptation work can also currently be seen in Lyric Arts' chilling Wait Until Dark) is that while Dr. Jekyll is played by one actor. his alter ego Mr. Hyde is played by four different actors who alternate and sometimes are all present on stage, sometimes along with Dr. Jekyll. This provides a unique glimpse into the fractured and frightening psyche of Jeckyll/Hyde. The story is well-told by the eight-person cast and well-staged in TRP's in-the-round space.

We all know the story from Robert Louis Stevenson's 1866 novella of the mild-mannered Dr. Jekyll (Clint Allen) who, fascinated by the idea that people could have two very different sides to them, turns himself into Mr. Hyde (played with an almost animalistic intensity by Austan Peterschick, Ryan D. Maddux, Lucas Gerstner, and Charla Marie Bailey) by drinking a potion. In this play, the story is told almost like a court case, with friends and acquaintances telling about their encounters with Mr. Hyde. He commits several crimes (trampling a girl on the street, beating a man to death with his cane) and is just a generally creepy presence in the neighborhood. He also begins a love affair with Elizabeth (Laura Hoover), the sister of the girl he trampled, who knows what he is but loves him anyway. The stories collide as the truth comes out, until we reach the terrible conclusion.

The world of Victorian England is well represented on stage. The cast displays a wide variety of precise and specific British accents, from Irish to Scottish and everything in between. The elaborate period costumes are beautifully formal, from top hats and canes to bustles and full skirts (costume design by Rebecca Karstad). Set designer Eric Kiekhaefer has sparsely filled the in-the-round stage with just a few set pieces, and the all important door to Mr. Hyde's house that can be rotated on the elevated portion of the stage. (A fun feature of TRP - patrons are allowed to walk right across the stage as they go to and from their seats!) Director George M. Roesler makes good use of the space, utilizing all of the aisles as well as the elevated space above the stage, so that the audience surrounds and is surrounded by the story.

Dr. Jekyll and Mr. Hyde continues through October 2. Head to Theatre in the Round in the Cedar/Riverside area to this new creepy twist on an old classic.