"The Children" at Pillsbury House Theatre 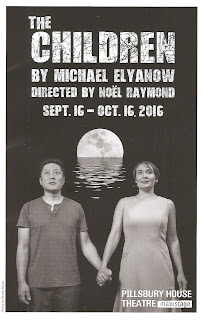 Medea. Even if, like me, you've never seen or read the play, we all know the story of the mother who kills her children. Worst mother ever, right? But maybe, as they say on Crazy Ex Girlfriend, the situation is a bit more nuanced than that. Maybe there's more to the story, maybe other people in the story see it differently. Playwright Michael Elyanow (see also the beautiful play with music Lullaby) wanted to explore the story from the children's viewpoint. He writes in the playbill, "I started writing The Children as a response play where somebody does take action to defend those kids. In the writing, the piece revealed itself to be a fever dream, a time-traveling mystery, a fish-out-of-water comedy, a theatrical event with a perception shift in every scene until we get at what the play is ultimately, singularly about: trauma survival." That's about as good of a description as I could imagine. The Children is not an easy play to categorize, but it is a wonderful one to experience for 80 minutes. It'll challenge your perception of Medea, as well as your perception of time and space.

The Children is a re-imagining* of Medea from the point of view of her soon-to-be-murdered children. But this time, a member of the chorus (Tracey Maloney) jumps in to intervene, stealing Medea's book of spells and transporting the kids (charmingly and poignantly played by Kurt Kwan and Kate Guentzel, manipulating children-sized puppets) to a cabin in modern day Maine in the middle of a hurricane, with their kindly nursemaid (Michelle O'Neill*) in pursuit. This mash-up of worlds creates a fun and interesting juxtaposition when the Classical Greek characters meet the folksy town sheriff (Jim Lichtsheidl, charmingly funny as always). But it's not as straight forward as that, and at times it's not clear who's who, or if what we're watching is a dream or reality. But hang on, because most of it makes sense by the end of the story. And if not all of it does, well that's OK too. It's a wonderful journey of imagination that's also grounded in the harsh reality of these children's experience.

The play is beautifully staged by director Noël Raymond on this very technical and yet aesthetically pleasing set. Joel Sass has designed a cozy and rustic cabin in the woods, with many working parts and pieces that create cool effects. These effects are flawlessly accomplished with help from Michael Wangen's lighting design and Katharine Horowitz's sound design to create a feeling of otherworldly-ness, as well as the very real and earthy hurricane. The puppet children are adorable and expressive in design (by Masanari Kawahara) and manipulation by Kurt and Kate, who manage to convey emotions simultaneously in their own bodies and the puppet bodies.

Pillsbury House is a theater that never disappoints. The Children is an imaginative look at a story we think we know, brought to life by some of our best actors, beautifully and technically staged in a captivating, magical, funny, poignant 80 minutes. Head to Pillsbury House (which is a community center in addition to a theater) in South Minneapolis before it closes on October 16 to take this ride.


*For another re-imagining of Medea, watch for New Epic Theater's production coming next spring, in which Michelle O'Neill will play the title role. In talking with Artistic Director Joseph Stodola after their Ivey win for their Fringe show Now or Later, it sounds like they have some really interesting ideas of how to portray Medea as more than just that crazy woman who killed her children, and tell the story from a feminist perspective.