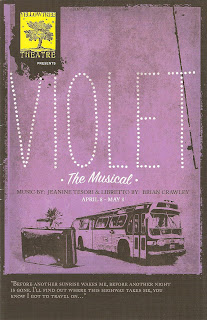 I fell in love with the 1997 Off-Broadway musical Violet six years ago after seeing Theater Latte Da's beautiful production in the Guthrie Studio. Produced on a sparse stage with a small cast and three-piece band, I found it to be so beautiful, raw, poignant, and relatable, that I went back and saw it again. It's one of my most listened to musical theater cast recordings, and is definitely in my list of top ten, maybe even top five, musicals. This lovely little musical finally made it to Broadway in 2014, where I saw it and loved it again.* But Violet is not a big splashy Broadway musical; it's more suited to small intimate spaces, which makes it a perfect choice for Yellow Tree Theatre. And even though this is a small musical by Broadway standards, it's huge by Yellow Tree standards. But they've really pulled out all the stops and created a beautiful and poignant production of this musical that's so close to my heart, featuring a wonderful ensemble cast that's the biggest and most diverse they've ever had. If you can snag a ticket before they completely sell out, I highly recommend you hop on the Yellow Tree bus and take this emotional and fulfilling journey with them.

Based on a short story, Violet is about a young woman on a journey across the South in 1964, from her home in the mountains of North Carolina to Tulsa, Oklahoma, where she hopes that a TV preacher can heal the scar she received in a childhood accident. Growing up with this disfiguring facial scar has made Violet tough and independent, and she's not afraid to look people in the eye and tell them what she thinks, even if they're unable to return her gaze. She befriends several people on the long bus trip, including a couple of soldiers named Monty and Flick. While journeying to what she hopes is a new beginning, she remembers her past journeys, and we see flashbacks of the young Violet. The two realities merge when Violet meets the preacher, doesn't find what she hoped she would, and is forced to face her past on her own. Like Dorothy in The Wizard of Oz, she has to go an epic journey to learn that she had the power all along to heal herself.

The score, written by Jeanine Tesori with lyrics by Brian Crawley, is a combination of Appalachian mountain music, country, folk, Memphis, and gospel, played by the five-piece band directed by Kyle Picha, just barely visible behind the stage. Which happens to be my favorite kind of music - another reason I love this piece. Yellow Tree Theatre co-founder Jessica Lind Peterson's voice is perfectly suited to this style of music and she's at her best here as a singer and an actor. She not only sounds beautiful singing these songs, but also brings out all of the emotions of Violet's journey. Jessica is perfectly matched by high school student Jordan McDonnell as young Violet, and between the two of them they create a complex portrait of this woman, flaws and all.

This ensemble truly is an embarrassment of riches, all of whom are new to the YTT stage. NYC-based David L. Murray Jr. is a wonderful find as Flick, and his rendition of "Let It Sing" is a literal showstopper. Mathias Becker is every bit the charming rogue as Monty, and also lets us see that he might just have a heart. As Violet's father, Adam Hummel is both tough and vulnerable, culminating in the heart-wrenching confrontation scene near the end of the piece. Ruthie Baker brings a bit of humor in the role of "old lady on the bus," and a bit of sass singing "anyone would do." The always entertaining Peter Middlecamp is so convincing as the preacher that I had to fight the urge to stand up and beg to be healed! And he forms a trio so sweet with Matthew Rubbelke and Daniel Greco on the old-timey country song "Who'll Be the One" that I wanted it to continue twice as long as it did. Rounding out the ensemble are Kayla M. Jenerson and Jamaica Meyer in multiple roles.

There may be 11 people on this tiny stage but it never feels crowded, thanks to Sean Byrd's direction and Andy Frye's choreography that is more about organic movement than big dance numbers. Eli Schlatter's sparse set design makes the most of the space, with a raised platform at the back used mostly for the young Violet flashbacks. Signs of all the places we visit along the journey adorn the back wall, and wooden chairs are the only furniture, transforming from bus seats to a bed when necessary.


What I love most about Violet is that it's such a universal story. Everyone has a scar or a wound from their past that they need to heal. A repeated theme in the music is "look at me," which is what Violet most wants (and what everyone wants) - someone to look at her, see the real her, and love her for it. This is such a rich piece, dealing with issues of race, gender, celebrity worship, focus on appearance, forgiveness, family. It's an excellent choice of shows for Yellow Tree to end their 8th season with. They continue to top themselves, and I'm already looking forward to Season 9! But in the meantime, go see Violet before this bus heads out of Osseo on May 8.


*Some of this post is borrowed from what I wrote about the 2014 Broadway production.