"Constellations" at the Jungle Theater 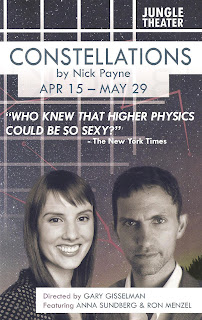 The theory of the quantum multiverse suggests that many different universes simultaneously exist, based on every choice we ever (or never) made. I don't know if I believe that, but I do believe that we are where we are in life based on a million choices we've made in our life, both significant and seemingly insignificant. It's intriguing to think that if we had made one or a hundred choices differently, we might be in a completely different place in life, doing something completely different, surrounded by completely different people. English playwright Nick Payne's new play Constellations, the second production in the Jungle Theater's 2016 season, plays with that idea to great effect. In one of my favorite plays that I've seen all year, we are taken on a journey of a relationship, but not just one single linear journey, rather countless iterations of that journey, some funny, some heart-breaking, some hopelessly romantic, all focused on these two people that are connected in some way in every one of the universes traveled.

Constellations reminds me of another two-person relationship play that plays with the idea of time, Bright Half Life, seen at Pillsbury House Theater earlier this year. But while Bright Half Life tells one story of a multi-decade relationship (or perhaps two slightly different perspectives of that one story) in a non-linear fashion, Constellations tells the many possible stories of a relationship that could occur based on different choices, events, and outcomes, in a mostly linear fashion. Roland (Ron Menzel) and Marianne (Anne Sundberg) meet at a barbecue, fall in love, or don't because they're in relationships with other people, she cheats on him, or he cheats on her, they break up, or get married, she becomes terminally ill, or they live a long and happy life together. Don't waste time trying to figure out "what really happened" because, a) it's a play, none of it really happened, and b) within the context of this play, maybe all of these things really happened. All scenarios exist simultaneously. In once scene when Roland tells Marianne he wishes they had more time, she responds that there is no such thing as more time. All of the time that ever was or will be exists now, and can never be more or less. Pretty heady stuff.

In addition to being a thought-provoking rumination on time, fate, and choice, Constellations is also a fascinating exercise in acting and theater, an exercise that everyone involved performs brilliantly. Scenes are repeated multiple times, sometimes with identical dialogue, sometimes with slightly different dialogue, always with different interpretations due to the delivery by these two incredible actors. Situations play out completely differently based on tone of voice, body language, speed of speaking. When Roland prepares a speech about bees to propose to Marianne, the first few times are the worst and most awkward proposal I've ever heard. But the last time he delivers the bee proposal, it's the sweetest and most touching proposal I've ever heard, one no woman could turn down. It's all in the delivery! The same thing happens when Marianne tells Roland the results of her biopsy, sometimes they both say all the right things and are completely supportive of each other and in this together, other times they choose different words or tone, and things end badly. Don't we all wish we could replay certain scenes in our lives and get them right this time? Constellations allows these characters to do that.

It's an incredible feat by the entire team to not only jump through all the hoops of this challenging script, but in doing so to create a piece of theater that is both intellectually stimulating and emotionally fulfilling. As someone who never quite knows what to say about the director, never having worked in theater or experienced what a director actually does, this piece clearly shows how the same scene can come across completely different based on direction. Director Gary Gisselman notes in the playbill "the only stage direction is 'with every change of font there is a change of universe,' and there are sixty font changes." He brilliantly leads his actors through these many distinct universes, aided by Barry Browning's lighting design that signifies every universe change, and Kate Sutton-Johnson's scenic design that creates a space as otherwordly as the cosmos itself, with many levels and areas for the actors to play on.

Of course, when performing this difficult theater feat it helps to have actors as talented as Ron Menzel and Anna Sundberg. Ron (whom the Twin Cities Theater Bloggers nominated as best actor in a play last year) is so real and funny and passionate as Roland, as is Anna, making Marianne's struggles with her illness painfully clear. The two have an easy natural chemistry between them that makes Roland and Marianne an easy couple to root for. And they do it all with charming British accents.

I wanted this 85-minute play to go on forever, with scenes continuing to repeat and morph and tell us more about these people and their relationship. But maybe it does go on forever, maybe it will always exist in some other universe, some other time, which is to say now because all time is now. I don't know, but I do know that you can take this crazy beautiful trip at the Jungle Theater through May 29. It's better to live in the universe in which you made the choice to go see it, than in the universe where you regret not seeing it. Although maybe they both exist anyway...