"Diary of a Wimpy Kid: The Musical" at Children's Theatre Company 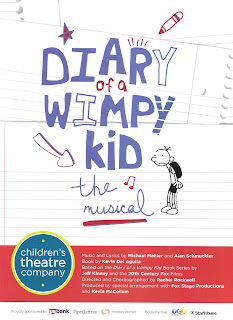 Diary of a Wimpy Kid: The Musical - I've got an animal heart for you. Even though I have no familiarity with the successful book series or movies, I felt obliged to see Children's Theatre Company's world premiere musical adaptation because of the talk about a possibly Broadway run, and producer Kevin McCollum also produced my favorite musical RENT (which celebrates its 20th anniversary this week). But all sense of obligation quickly went out the window as the show won me over with it's clever and musically diverse score, universally relatable story of a kid trying to find himself in middle school, and most of all this incredible cast of mostly Twin Cities youth. Whether you're a kid stuck in the middle (school), or a jaded grown-up, Diary of a Wimpy Kid: The Musical is simply irresistible, and I think it's going to go far.

Greg Heffley is stuck in the middle. He's the middle son in the family (with an scary teen older brother and a spoiled little brother), and in the middle of the popularity ranking in middle school. The story plays out over the school year as Greg tries any and everything to move up in the ranks. The musical recounts his adventures as he tries (and fails) to be good at sports, the best smile, class clown, newspaper cartoonist, treasurer, safety patrol, anything that will earn him a place in the yearbook to go down in history. Along the way he learns lessons about friendship and doing "the right thing." It's a sweet, heart-warming message that's not preachy, but told in a language kids (and adults) will get.

Greg narrates his story and is on stage for pretty much the whole show. Chicago-based Ricky Falbo leads this amazing cast of young actors and carries the show with aplomb. He's just perfect as this kid for whom nothing goes right, but he keeps trying. As his nerdy best friend Rowley, David Rosenthal is completely adorkable, as well as showing off the poise and stage presence gained from a stint in Matilda on Broadway. But he's surpassed on the adorkable scale by local youngster Soren Thayne Miller as Fregley, the kind of kid who asks if his scab smells weird and apologizes with a booger. Most of the show consists of solely kids on stage, about a dozen or so including many familiar faces from CTC and stages around town. These kids are incredibly playful,
professional, enthusiastic, and in the moment. Teach your children well, and that's something CTC does brilliantly. I felt like I was watching the future of the Twin Cities theater scene, and am looking forward to seeing what these kids will do 10 or 20 years from now. Exhibit A: Brandon Brooks, who grew up on the CTC stage and now returns as a (young) adult, making the most of the role of Greg's goth teen brother who has a band called Löded Diper.

There are a few adults occasionally onstage, and they're pretty good too. Although Reed Sigmund is more like a big kid than a grown-up, stealing scenes left and right as various adults in the kids' world. China Brickey also displays great range as all of the female adults, and a kid couldn't ask for better stage parents than Autumn Ness and Tod Peterson. They're all wonderful, but this show really belongs to the kids, and in their hands it just sings (literally and figuratively). Zoo-wee mama!

The creative team is mostly from the Chicago area, so if not a strictly Minnesota creation, it's at least Midwest born! Michael Mahler and Alan Schmuckler combined their talents to write the music and lyrics, with Kevin Del Aguila contributing the book. There's a lot of music in this show, and includes everything from rap to gospel, heavy rock to bubble gum pop. The music flows quite naturally into and out of the story. Andrew Bourgoin leads the six-person orchestra and keeps the score moving along at a brisk pace, the top of his bobbing head just barely visible above the pit. Director and choreographer Rachel Rockwell does an incredible job with this large cast of mostly children, bringing out the best in each of them, with an energy that never lags. Scenic designer Scott Davis has designed a two-dimensional cartoonish set that I assume was inspired by the books. Everything appears to be drawn on lined loose leaf notebook paper, with projected images commingling with the physical set pieces to create a world that looks like it stepped out of a diary.

Diary of a Wimpy Kid: The Musical is a brilliant new creation based on a beloved children's story, that comes across as a sort of a mash-up of Grease and Spring Awakening for the pre-teen set, with a little Billy Elliot thrown in. Even though I didn't think it would have anything for me, a grown-up with no kids and no familiarity with the source material, I found it to be a highly entertaining show that speaks to the middle schooler in all of us. Doesn't everyone feel "stuck in the middle," confused about "doing the right thing," trying to figure out where we fit in our various communities? This musical celebrates that in a joyful, funny, heart-warming way, with an incredibly talented cast of young people. Wimpy Kid continues at Children's Theatre Company through June 12. Take your favorite little ones, middle schoolers, or just go yourself and experience this exciting new musical.