"Harvey" at the Guthrie Theater 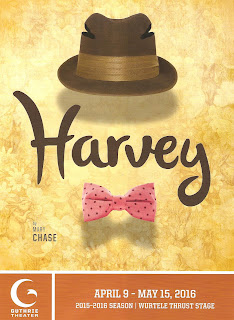 "I've wrestled with reality for over 40 years, and I'm happy to report that I finally won out over it." So says Elwood Dowd, he who sees the imaginary six-foot tall white rabbit, in the 1944 play Harvey by Mary Cole. That's an attitude I can fully get behind, because sometimes reality sucks. And I think that's part of the reason for my love of going to the theater - because I can forget the sometimes depressing reality of the world for a few hours and immerse myself in the world of the play. Harvey is just such a play. So maybe it's 70 years old, and is nothing ground-breaking or particularly illuminating about the society we live in today, but the Guthrie's new production of this classic is wonderful escapist entertainment that also provides some still relevant commentary on people, society, and relationships. The world might be a happier place if we all had our own Harvey to focus on rather than dwell on the harshness of the world around us.


I had never seen the play or movie version of Harvey, so I didn't know much about it other than something about a rabbit. The short version of the story is that bachelor Elwood has an imaginary friend since his mother died, which makes the high society lives of his sister Veta Louise and her daughter Myrtle Mae difficult. Veta Louise tries to get him committed, all sort of mishaps happen before they finally get him there, and then she finally realizes that Elwood is just fine the way he is, and she wouldn't want him to be any different. For Elwood is just about the kindest character ever written. He wants to be friends with everyone he meets, he's genuinely interested in their lives, he always sees the best in people, and he's never angry or cruel. If that's crazy, we could all stand to be a little more crazy.


The fantastic and diverse 11-person cast is made up of mostly local talent, with a few newbies sprinkled in - just how I like my Guthrie casts to be. David Kelly makes his Guthrie debut as Elwood, and couldn't be more charming or likable in the role. Guthrie favorite Sally Wingert is a hoot as Veta Louise, who genuinely loves her brother, if not the trouble that the rabbit brings. Sun Mee Chomet is adorable as her daughter, especially in her flustered flirty relationship with Tyson Forbes' orderly at the institution (can you blame her?). Another welcome newcomer is Ryan Shams as Dr. Sanderson, trying desperately to please Dr. Chumley who, in Steve Hendrickson's hands, delightfully transforms from the stern doctor to a Harvey believer. Ansa Akyea and Greta Oglesby make brief but memorable appearances, as does the always hilarious Peggy O'Connell. Rounding out the cast are Ashley Rose Montondo as nurse Kelly and Michael J. Hume as the family lawyer.

The play takes place primarily in two settings - the stately family home, and the crisp cold mental institution. The two sets are accomplished by a massive rotating piece with elaborate backdrop on either side, and of course the Guthrie's trademark lowering of the stage floor to change set pieces (take a tour of the Guthrie sometime to see just what is below the stage). The 1940s period costumes are, of course, gorgeous (the shoes! the hats!), and the lighting helps us to imagine good old Harvey (scenic design by William Bloodgood, costume design by Deborah M. Dryden, and lighting design by Xavier Pierce).


Although the attitude towards mental illness is dated (he's crazy - give him an injection, lock him up!) the eventual conclusion is almost enlightened, that perhaps people who society label as crazy are just different, and we should accept and love them for who they are instead of trying to force them to conform to society's expectations of behavior. I found Harvey to be delightful, charming, and refreshingly sweet. Harvey can be (not) seen on the Guthrie's thrust stage through May 15.