"C." by Theater Latte Da at the Ritz Theater 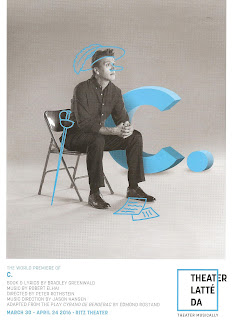 Friends, @TheaterLatteDa's C. totally wrecked me & left me with such an exquisite ache I might never recover. #theatermusically #allthefeels This was my 140-character review of Theater Latte Da's world premiere new musical C., and even though I will give you several hundred more words here, I'm not sure I can express it any better than this. This new musical adaptation of the classic play Cyrano de Bergerac, featuring book and lyrics by Bradley Greewald and music by Robert Elhai, directed by the incomparable vision of Peter Rothstein, is the second in Latte Da's NEXT 20/20 program in which they have committed to bringing 20 new works of music-theater to the stage by 2020. I saw the first reading of the show three years ago and thought it showed great promise, but it has exceeded my expectations in what is now a fully formed and exquisite new musical, with all elements of production coming together to tell this beloved story in a new and innovative way.

Proving that there is no end to his talent, Bradley Greenwald went back to the original French play to write this new translation/adaptation of the story. His language is poetic and lyrical while still sounding natural and modern. He sticks fairly close to the original story, or at least what I remember of it from Park Square Theatre's 2014 production of the play. Cyrano and Christian are soldiers in the same regiment, the former known for his skill with words and the sword, and the latter a bit of an unknown as newcomer to the regiment. Cyrano is in love with his beautiful childhood friend Roxane, so when she tells him that she loves the handsome Christian, he agrees to look out for him. Unbeknownst to Roxane, he also agrees to write letters to her from Christian, who is not blessed with the gift of poetry as Cyrano is, signing them with the letter C. Roxane continues to fall in love with Christian through his (Cyrano's) letters, culminating in a lovely balcony scene reminiscent of Romeo and Juliet. The second act sees Cyrano and Christian going off to war, with Roxane in pursuit, unable to be parted from her love. When she tells Christian that she loves him for his soul, and would love him even if he were ugly, he realizes that it's Cyrano she truly loves, not him. It's a tragically bittersweet ending, as truths are revealed too late.*


Cyrano thinks his big nose, his "ugly" appearance, is standing in the way of getting what he wants, namely Roxane. But it's not. His only obstacle is the belief that he's ugly and undeserving of Roxane's love. We all have thoughts of "I'm not this enough" or "I'm too that" that stand in the way of our happiness. Cyrano shows us the tragedy that can result from listening to our thoughts of self-doubt and letting them stop us from going after the life that we want.

The 16-person ensemble of musicians, actors, and singers is fantastic (although the lack of diversity in a cast this size is disappointing), but Bradley Greenwald is the brilliant center around which they revolve. He imbues the iconic role of Cyrano with such humanity, passion, humor, pathos, and utmost dedication to the character, the story, and the words that he wrote. And it goes without saying that his voice is stunning. Writing this beautiful dialogue and song lyrics, that flow seamlessly from one to the other, and playing the title character so beautifully and honestly, is truly a remarkable feat from this beloved local theater artist who continues to surprise us with his talent.

Highlights in the ensemble are too many to mention, but must include Kendall Anne Thompson's Roxane, lovely and radiant as the embodiment of love and beauty and the object of both Cs' affection; David Darrow as the adorably sweet but not so clever Christian, who realizes too late the pickle they've gotten themselves into with this seemingly harmless trickery; the always entertaining Max Wojtanowicz as everyone's favorite baker; singer/actor/musician Grace Lowe as one of the Bohemians; John Middleton as the pompous senator also after Roxane; and Janet Hanson, stealing a few scenes as Roxane's sweets-loving companion.

Robert Elhai's ingenious score is a perfect match to Bradley's words, and covers a wide range of styles that feel organic to the storytelling, very much like the poetry plucked from the air Cyrano is always talking about. Some songs sound like folk songs that have been sung for hundreds of years, some like modern songs you might hear a folk singer sing in a coffee shop, some are beautiful musical theater ballads, some are rhythmic marching off to war songs. The songs are arranged with sparse orchestration, typically just three to four instruments accompanying the singing, instruments as varied as accordion, various flutes, stringed instruments, and other Renaissance era instruments. The band is not separate from the cast, but one in the same with the ensemble, playing in the cafe or the theater, or rehearsing off-stage, characters in the story as much as anyone else. Even Music Director extraordinaire Jason Hanson gets to talk, play a role, and run around the stage while making this lovely score sound the best it possibly could. Hooray for the band!

This musical sounds exquisite thanks to Sean Healey's sound design. I'm one who always begs for unmiked performers in musicals, believing that leads to the most beautiful and authentic sound. This show has proven me wrong. The performers are miked, but it's so subtly done, both visually and audibly, and with such a delicate touch, that for most of the show it's not even noticeable. There have been complaints in the past (not by me) about the sound in this old theater, but Theater Latte Da has obviously figured out the acoustics in their new home with this fine example of how to amplify the sound of music-theater without compromising the beauty of the music and words, especially with an intimate show in an intimate space performed by trained professionals.

Chanhassen Dinner Theatre's resident costume designer Rich Hamson proves that he can do subtle and natural costumes as well as he can do bold and spectacular costumes (e.g., Beauty and the Beast). The cast is dressed in neutral shades that range from off-white to khaki, the only hint of color being Roxanne's pale pink dress, and an appropriate turn to black for the somber ending. Cadet uniforms are dirty and distressed, contrasting with the new recruit's crispness, and the Bohemians look charmingly Bohemian.

Jim Smart's scenic design carries the shabby chic look of the Ritz Theater's patchy paint and cement walls onto the set, with walls at the back and on either side of the stage that exactly match the also seen walls of the theater. A large tree with overarching limbs dominates the set, from which a curtain is hung to hide or reveal. Latte Da continues to make great use of the Ritz, utilizing the side counter seats and the audience space as well.

Theater Latte Da set the bar high with the first new piece of music-theater in their NEXT 20/20 program, the modern folk-rock love story Lullaby. They've raised the bar even higher here with C., an exquisite new musical, an idea so beautifully brought to fruition. Both pieces explore the genre of music-theater and push it to new places with innovation and creativity. It's thrilling that the American art form of musical theater continues to evolve in such exciting ways, and we're so lucky that such work is created, developed, supported, and produced right here in Minneapolis/St. Paul. Cyrano's life motto could very well double as the motto of NEXT 20/20: "Sing out, sing out, let your song be known. Let the melody be beautiful, and the poetry always your own."

C. continues through April 24, and next month Theater Latte Da will present readings of three new works in progress as part of their annual NEXT series. The future of music-theater is not just on Broadway in Hamilton, it can also be experienced at the Ritz Theater in NE Minneapolis.

*Plot summary borrowed from my post about Park Square Theatre's 2014 production of the play.