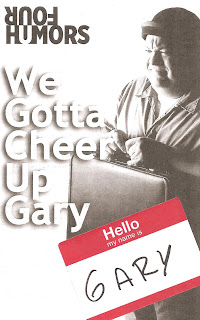 Are you feeling a little down? Need to be cheered up? Let the trained cheerologists of Four Humors lead you through your one-on-one (or one-on-many) cheersultation! I know they always make me feel better! Now you can sign up for one of their intimate sessions held behind the arch at the gorgeous Southern Theater, where cheerologists Jason Ballweber (silent Gary), Mike Fotis (angry Gary), Ryan Lear (accident-prone Gary), and Dario Tangelson (the Gary in charge) will lead you and 40-some other Garys through a series of jokes, magic tricks, improv, and physical comedy that is sure to leave you cheerier than you were one hour before. All this can be yours for a low price, or free as part of Southern Theater's ARTshare program. With everything that's going on in the world, couldn't we all use a little cheering up?

OK breaking from the gag, Four Humors' ARTshare show We Gotta Cheer Up Gary is a fun, silly, ridiculous, hilarious hour of the kind of comedy that these guys specialize in. Not exactly improv because I believe this is a (mostly) scripted show, but with the unexpected, natural, reactive, and present style that characterizes improv. Four Humors' mission is "to create art that celebrates the humor, stupidity, and beauty of our world by letting the artist connect with the audience in a vulnerable and honest way." That is this show in a nutshell. Plenty of humor, some of it stupid (in a good way), with a bit of beauty thrown in in a lovely sad song/story/scene at the end.

I don't want to tell you too much about the show, but expect the unexpected. You will not be sitting in the usual Southern Theater seats, but in about 50 chairs set up behind the arch (it's super cool to see more of this unique space, but due to the limited space you'll need to get tickets in advance). The show begins with a hilarious parody of instructional videos (starring Brant Miller and Matt Spring), and then the cheering up begins. The secret is, it's the cheerologists who really need the cheering up. Jason, Mike, Ryan, and Dario all commit fully to the character and the situation, easily bringing the audience along on this crazy ride. The show is a bit interactive as the cheerologists know you're there and are trying to cheer you up, and might ask you a few questions (sit in the back or away from the aisle if that scares you).

If you're looking for theater out of the ordinary, check out this show. The audience at the Saturday matinee I attended was decidedly younger than most theater audiences around town. Perhaps these kids didn't know they were actually at the theater (shhh, don't tell them, we want them to keep coming back!). We Gotta Cheer Up Gary continues through April 22 in rep with the Southern's other ARTshare shows. After that Four Humors will move to the Guthrie Studio to present their adaptation of Don Quixote. If their take on another classic piece of literature, Lolita, is any indication, this is a show not to be missed. In the meantime - go get yourself cheered up!