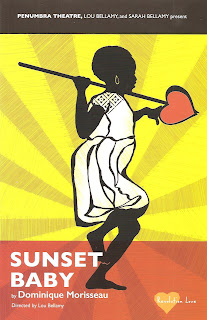 A year ago Penumbra Theatre presented Dominique Morisseau's play Detroit '67, set during the riots that occurred in that time and place, about a family trying to make a life for themselves amidst the revolution. Her play Sunset Baby follows the next generation, a present day story about a woman born of parents active in the Black Power Movement, and how the sacrifices her parents made affected and continue to affect her. It's a powerful, weighty play, with more layers than I can hope to unwrap in one viewing and a few hundred words. It's brilliantly acted by this three-person cast, and brilliantly directed by Penumbra's Founder and Co-Artistic Director Lou Bellamy, so you should just go see it, be immersed in this very specific and well-defined world created by the playwright and fully brought to life by the cast and creative team, and attempt to unwrap the layers for yourself.

We meet Nina (named after Nina Simone, of course) on her way out to work, which turns out to be selling drugs and stealing with her boyfriend. But they're only in it until they make enough money to escape to a better life in London, or Rome, or Brazil, or somewhere far away from the "slums" of New York City. Nina's father makes an unexpected visit, asking for some letters that her recently deceased mother left her. Nina's father was in prison for most of her life because of his actions in the Revolution, after which her mother succumbed to drug addiction. So Nina's not very inclined to entertain her father. He tries another angle, going to her boyfriend Damon, which also doesn't sit well with Nina. She has it out with her father, acknowledging that they've both shut off their feelings for survival. Nina's mother left her the letters so she would know "what we do for love," and in the end Nina makes choices for love of herself, for survival, in search of a better life, which is what her parents sacrificed everything for all along.

This strong three-person cast could not be better. If you thought Jasmine Hughes was fierce in Mixed Blood's Pussy Valley last year, you ain't seen nothin' yet! She's been appearing on stages around town since then, but she's at her best here, in a completely fearless, raw, gut-wrenching performance as this woman who's been damaged by her environment and her parents' choices, but is determined to survive and make a better life. The always wonderful James Craven plays her father as a stern stoic man, with flashes of feeling, especially in the scenes in which he's recording his thoughts for and about his daughter on video (a video that is simultaneously displayed on the back wall of the stage in the last scene). Last but not least, Ronnel Taylor is a charmer and a scene-stealer as Nina's boyfriend.

Scenic designer Vicki Smith has transformed Penumbra's stage into a realistically drab and sparse apartment, complete with dingy walls, stocked kitchen, and a few books piled on a shelf. Kathy Maxwell's video design is used sparingly and effectively; in addition to the aforementioned video of Nina's father, there is a lovely final video projection surprise which I won't spoil for you here, but it puts the sweet in the bittersweet ending.

Sunset Baby continues at Penumbra Theatre through May 8. I'll leave you with a quote from director Lou Bellamy's note in the playbill, which describes the power and beauty of this play better than I ever could:


We are all heirs to history. In Sunset Baby, Dominique Morisseau introduces us to Nina: a fierce and intelligent black woman who is not just a product of her environment, but a woman who carries the triumphs and scars of her parents who were participants in the Black Power Revolution. Though important strides were made, many of the negative forces (poor educational opportunities, drugs, violence, unemployment) that plagued her parents still exert debilitating effects on her generation. The extent to which the local and federal government waged war on black revolutionaries in the 1960s and 1970s is staggering. Now adults, many grew up damaged by the dissolution of family and warped by the wounds of war. Morisseau's characters represent boundless potential, even constrained by the very real forces of racism, poverty, and lack of opportunity that many black Americans face today.