"Fiddler on the Roof" at Artistry 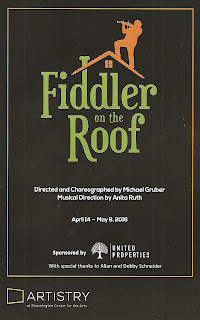 Tradition! The opening song of Fiddler on the Roof speaks of the traditions in the little Russian town of Anatevka in the early 20th Century, setting the stage for a story steeped in tradition, when to hold on to it and when to let go and embrace a new way of doing things. The new production at Artistry (formerly known as Bloomington Civic Theatre) is also steeped in tradition. There's nothing really new or innovative about this production; it's a faithful interpretation of this classic musical that, though a bit too long, is full of beautiful and familiar music and much heart in this universal story of a specific family. Artistry has assembled a huge and talented cast, and as always the score sounds gorgeous coming from the nearly 20-piece pit orchestra. If well done traditional classic musical theater is your thing, you might want to check this one out before it closes on May 8.

The 1964 musical Fiddler on the Roof is based on late 19th century stories by Russian Jewish writer Sholem Aleichem. Tevye is a poor and simple man with strong belief in his Jewish faith and traditions. He believes in doing things the way they've always been done, which means arranging marriages for his five daughters. But it's 1905, and the times, they are a-changin'. Oldest daughter Tzeitel wants to marry a man of her choice, a poor tailor. Despite the fact that Tevye has arranged for her to marry the wealthy (and much older) butcher, he gives in to Tzeitel. It's obvious that the girls have their papa wrapped around their little fingers and he would do (almost) anything to see them happy. In the struggle between tradition and his daughters' happiness, his daughters win. Second daughter Hodel moves further away from family tradition when she agrees to marry a man not from the village, a scholar and political activist who gets arrested and sent to Siberia, with Hodel to follow. Third daughter Chava goes a step too far when she wants to marry outside the faith, a Russian man named Fyedka (but he's one of the "good" Russians). It breaks Tevye's heart to do so, but he cannot accept this gross breach of tradition and the seeming rejection of the faith he holds so dear. But these are not the only problems poor Tevye is dealing with; 1905 Russia was not a welcoming place for Jews. Facing religious persecution and pogroms, Tevye and his family are forced to leave and find a new home. It's a sad ending, but there's also a feeling of hope that this family will stay together and continue their traditions, as well as begin new traditions, wherever they find themselves.*

Making his debut at Artistry, John Paul Gamoke is just wonderful as Tevye, who is not only the main character but also the heart and soul of the show. He perfectly embodies the gruff but lovable Tevya. He's well-partnered with Wendy Short-Hays' Golde. The daughters (Kelly Matthews, Anne Brown, and Maddy La Roche) and their beaux (Riley McNutt, Ryan London Levin, and the sweet-voiced Eric Sargent) are also well-cast, I only wish we had more time to spend with each one. The rest of this 30-person cast (this is not a small show!) fill out all the roles and make Anatevka seem a busy and welcoming place to live.

One of the best things about Artistry is their full and traditional pit orchestra, which you don't see a lot anymore. As much as I love a sparse musical, there's nothing quite like the thrill of a pit orchestra, especially when conducted by Artistry's resident Music Director Anita Ruth. From the first simple line of the fiddle, through the big rousing dance numbers and tender ballads, and back again to the simple lovely fiddle, this familiar and beloved score rings out pure and beautiful. Director/choreographer Michael Gruber has put together some fantastic dances, especially the always thrilling bottle dance. Although I'm not sure why several of the bottle dancers are women in beards, and why can't the fiddler just be a woman? Even Tevye might be OK with that in 2016.

Fiddler on the Roof is the final musical in Artistry's first season under this name, a season that also included an energetic Hairspray, a beautiful and epic Phantom (no, not that Phantom), and a super fun Best Little Whorehouse in Texas. Next season includes some exciting choices that are less, well, traditional: The Drowsy Chaperone, The Baker's Wife, Little Shop of Horrors, and The Secret Garden. I might also need to make the long drive down to Bloomington for some of their plays, which include Talley's Folly, Bad Dates featuring Christina Baldwin, and Wit starring Sally Wingert. The 2016-2017 season looks like a great one, but in the meantime you can enjoy the lovely traditions of Fiddler through May 8 (and Blithe Spirit opening in May in the black box theater).


*Plot summary borrowed from what I wrote about the 2013 production at Chanhassen Dinner Theatres.