"Rodgers and Hammerstein at the Movies" at Orchestra Hall 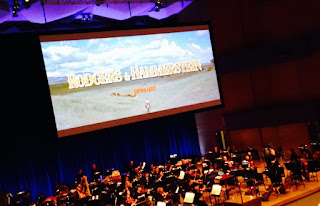 From "the hills are alive with the sound of music" to "Oklahoma, where the wind comes sweeping down the plain," composer Richard Rodgers and lyricist Oscar Hammerstein II have given us some of the most memorable and beloved melodies and lyrics in all of musical theater. Most of their creations were made into movies several years after the stage success, allowing even more people to fall in love with them. This weekend the Minnesota Orchestra is presenting a concert of excerpts from seven of their big hits, with clips from the movies shown on a big screen. As a former band geek who's normally too busy attending theater to listen to the orchestra, I revel in the chance to get my orchestra fix in when they do something theater related. It's an absolute thrill to hear this huge full gorgeous orchestra playing selections from Rodgers and Hammerstein's incredible and prolific partnership.

Despite being a huge fan of musical theater, I've never been much of a movie buff. Of the seven musicals performed in this concert (including five stage-to-movie adaptations, one musical written for the movies, and one written for a TV movie), I've only seen one (since I've probably seen The Sound of Music a hundred times, maybe that makes up for what I've missed?). But I have seen five of the seven on stage. Fortunately MPR's Lynne Warfel was on hand to give us some background and trivia on each show, and Rodgers and Hammerstein's partnership in general. Appropriately, I couldn't see her on the side of the stage from my side balcony seat, so I only heard her soothing radio voice guiding me through the evening.

The concert opened with a medley from The Sound of Music, but no movie clips (shame, I would have loved to have seen my beautiful Salzburg on the big screen). The always thrilling title song set the stage for a wonderfully entertaining evening of music. Selections from five movies were played by the orchestra, perfectly matched to the movie clips. Through some miracle of technology, they were able to remove the orchestral tracks from the films while maintaining the speaking, singing, and even foot-tapping sounds. The music matched perfectly with the audio from the films, as well as the on-screen dancing, thanks to conductor Sarah Hicks and her fabulously toned arms who kept the orchestra moving in time with the movies.  Highlights of the show include:

Rodgers and Hammerstein shows may seem quaint and old-fashioned now, but they truly were pioneers who advanced the art form of musical theater and helped to make it what we know today. And the music stands the test of time, as evidenced by this "enchanted evening" of live music and beloved old movies. One performance of Rodgers and Hammerstein at the Movies remains for my fellow theater geeks to get their orchestra fix, or for orchestra geeks to get their theater fix. Next up, Broadway stars and Minnesota actors Laura Osnes and Santino Fontana combine forces in A Broadway Romance in July.