"Beauty and the Beast" at Chanhassen Dinner Theatres 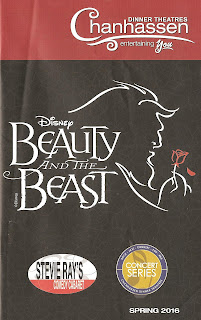 Of all the Disney heroines, the odd girl with her nose stuck in a book is the one that I relate to most, especially since the 1991 movie Beauty and the Beast came out when I was a teenager and at my most odd bookishness. Belle is a heroine for all us normal girls who feel like we don't quite fit in. She meets another odd soul (who conveniently happens to be a handsome prince inside) and they make a connection, bringing out the best in each other. Yes it's a typical Disney fairy tale that ends in a wedding, but at least it's a meeting of equals who rescue each other. A few years after the movie, Beauty and the Beast was adapted into a successful Broadway musical (the 9th longest running musical on Broadway), and in 2005 Chanhassen Dinner Theatres was one of the first regional theaters to mount a production. Now, 11 years later, director Michael Brindisi and his team are revisiting this classic and beloved fairy tale with an energetic show that is flawlessly cast and beautifully designed. My inner odd bookish teenage girl (who's never very far beneath the surface) was quite pleased.

For those of you who are only familiar with the movie, the stage show stays fairly close to the plot and includes all of the beloved songs like "Be Our Guest," "Gaston," and the title song, plus a half dozen or so new songs that flesh out the characters of the Beast, Belle, and her father. After complaining about her provincial life, Belle finds adventure by rescuing her beloved father from an enchanted castle and taking his place as the Beast's captive. The only way the Beast and his animate object servants can return to their human selves is if he learns to love and be loved in return. But who could ever learn to love a Beast? Against all odds (and because this is Disney), Belle and the Beast eventually fall sweetly in love, he lets her go, and she comes back to save him from the angry townspeople. The curse is broken and they all live happily ever after thanks to the transformative power of love.

This sweet fairy tale comes to life thanks to this excellent local cast, each actor perfect for the role. As the titular beauty, Ruthanne Heyward is everything you want Belle to be, a bookish yet dreamy heroine, with a lovely voice and strength of character. Robert O. Berdahl is equally excellent as the Beast, and it's wonderful to see him somewhere other than the Guthrie, and in a lead role again. Remarkably, he's able to emote beautifully while spending most of the show buried under piles of fur and a mask (and/or prosthetics, I'm still not entire sure how they do the beast-to-man transformation). With facial expressions virtually off the table, he's able to create a complex and sympathetic character using just his expressive voice (warm and rich with an occasional raspy growl) and animalistic physicality (low to the ground, crouching on furniture, cocking his head like a curious dog). This is a Beauty and a Beast to root for, both individually and as a couple.

Eleven years ago Keith Rice played Gaston, and has now graduated to a charming performance as Belle's sweetly rumpled mad scientist father. Taking over as Gaston is Aleks Knezevich in a very specific, highly stylized, completely committed performance. With a wide vapid grin, twitchy head movements, and uber flexing, he is the cartoon Gaston come to life. As his sidekick Lefou, Daniel S. Hines is the willing recipient of many slapsticky jokes. To mention a few other highlights, we have a warm Angela Landsbury-esque Susan Hofflander as Mrs. Potts, the adorable Jay Soulen as her cup/son Chip, Scott Blackburn's stiff and stern Carson-like butler/clock, Mark King and Ann Michels as the French and flirty Lumiere and Babette, Emily Rose Skinner as the opera singing wardrobe, and a brief appearance by David Anthony Brinkley as the jailer in all his Uncle Fester creepiness.

Nayna Ramey's sparse and effective set design easily and quickly transforms from the dark and creepy forest to the enchanted castle to a tavern in the village. Hanging silks represent columns and provide a place for the Beast to hide behind, as well as being used in the choreography. Speaking of, Tamara Kangas Erickson has choreographed some exciting ensemble dance numbers ("Be Our Guest") and thrilling fight scenes. Rich Hamson's delicious costumes bring this fairy tale to full and colorful life, with a wide range from the villagers to animated household objects to luscious gowns for Belle. Add in the evocative lighting (designed by Sue Ellen Berger) and the overall effect is really quite stunning. Last but not least, this familiar and beloved score (the first music I ever owned) sounds fantastic as performed by the orchestra (hidden behind a screen at the back of the stage) under Music Director Andrew Cooke and Conductor Richard Long.

I often refer to Chanhassen Dinner Theatres as the comfort food of musical theater. And that's not a bad thing. They know what they're doing and they do it well, which is to bring to life classic, crowd-pleasing, traditional musical theater. This new production of Beauty and the Beast is an excellent example of that. Playing all summer through the end of September, you have plenty of time to get out to Chanhassen, bring your friends, family, and inner odd bookish teenage girl, and be transported and transformed by this splendid fairy tale.