"Shrek: The Musical" at Lyric Arts 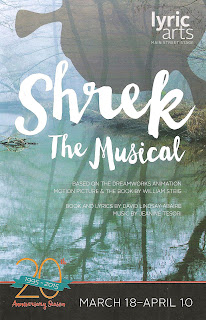 "Fairy tales should really be updated." So sings Shrek in the 2008 musical adaptation of the smash hit 2001 movie. And that's exactly what the creators of the movie and the musical (playwright David Lindsay-Abaire, who also wrote Rabbit Hole, Good People, and Fuddy Meers, and composer Jeanine Tesori, who is also responsible for one of my favorite musicals Violet, opening soon at Yellow Tree Theatre) have done. Lyric Arts' joyful and colorful new production is my third go-round with Shrek: The Musical, for which I have much affection despite it being a blockbuster movie adaptation. The musical retains and builds on the funny, clever, irreverent tone of the movie, adding a diverse collection of songs. This updated fairy tale for the modern age is well done by Lyric Arts with a fantastic cast, bright and colorful set and costume design, and a joyfully irreverent spirit.

After being kicked out by his parents at age 7, as is the ogre way, Shrek is living a solo life on his swamp, telling himself he's happy away from the "Big, Bright, Beautiful World." The swamp is soon invaded by a bunch of fairy tale characters, from Pinocchio to the Big Bad Wolf, who were banished from the city of Duloc by the evil Lord Farquaad. Shrek heads to Duloc to try to remedy the situation, and picks up Donkey along the way, his new best friend and a constant source of annoyance. The vertically challenged Farquaad takes the opportunity to send Shrek on a task that he's unwilling to do himself - rescue Princess Fiona from her tower so that he can marry her and become King. Fiona has been waiting all her life for a knight to rescue her, just like in the fairy tales. She's somewhat disappointed when her rescuer is an ogre, but is reassured when they tell her they're taking her to a Lord in a castle. Along the way something unexpected happens - Shrek and Fiona realize they have a lot in common, from their unhappy childhoods (leading to the charming song "I Think I Got You Beat") to their talent in making bodily noises. But secrets, miscommunication, and expectations lead Fiona to go through with the wedding, until Shrek comes to stop it by telling her the truth about his feelings for her and the man she's about to marry. And these two crazy ogres and their wonderfully freakish friends live happily ever after.* 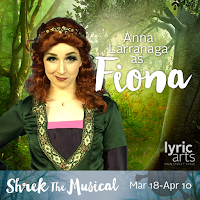 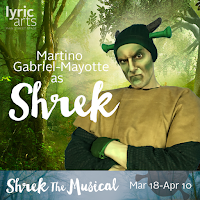 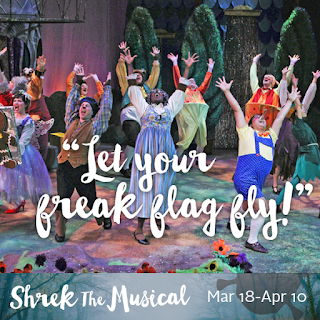 Shrek is a funny and heart-warming story that turns the traditional fairy tale on its head - "true love" is not only for pretty and proper princesses and their handsome knights, but can be just as strong and beautiful between two crass and flatulent ogres. True beauty is simply being yourself.* Lyric Arts brings this clever creation to full and joyful life. Shrek continues through April 10, but Lyric Arts musicals tend to sell out so don't wait too long to let your freak flag fly (check out Goldstar for half-price tickets).