"The Normal Heart" by New Epic Theater at the Lab Theater 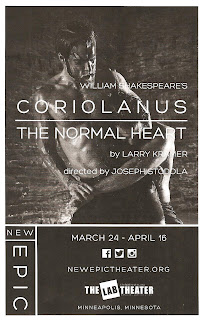 In just their second season as a theater company, New Epic Theater is tackling not one but two challenging and not often performed political plays with The Normal Heart and Coriolanus, performed in rep (something that's also not often done). It's an ambitious undertaking for any theater company, much less a young one. But in this short time New Epic has already established themselves as a company that does striking work, both visually and emotionally (see also Doubt and One Arm). The first half of this pair of plays opened last weekend, a strikingly beautiful and devastating production of the 1985 Off-Broadway play The Normal Heart about the early days of the AIDS crisis. Friends, this is a piece of theater not to be missed. The Normal Heart returns on April 7, but in the meantime you can see the other piece of the puzzle, Shakespeare's Coriolanus, this weekend, as I will be (ticket information and performance schedule here). Director Joseph Stodola* and New Epic Theater have a unique vision, one that deserves to be seen.

It's 1982 and gay men in New York City are dying by the dozens, then hundreds, and no one knows why, or how it's spread, or how to prevent it, or how to treat it. Ned Weeks is a writer, and uses that skill to make some noise, penning angry articles and letters, trying to get someone to listen and do something. He does not abide by the saying "you catch more flies with honey," but he's fighting in the only way he knows how, which often antagonizes people along the way, even his allies. He bristles when the handsome and congenial Bruce is voted president of the gay men's health organization that he founded, but continues to fight for meetings with the mayor and other politicians. When his lover Felix, a New York Times reporter, falls ill, his fight turns more personal and desperate. At the end of the play Ned laments that he should have fought harder, but I cannot imagine anyone fighting harder than Ned, or his real life counterpart, playwright Larry Kramer. My friends at Minnesota Theater Love saw the Broadway play in 2011 and said that he was there most days outside the theater, handing out fliers. Like Ned, Kramer uses his best weapon, the pen, to fight for the cause.

Though the show begins with a dance to "Somebody to Love" (which I luckily got to see twice due to a technical glitch during the preview), this is not Glee. This beautiful and devastating dance (choreographed by James Kunz) is a visceral expression of the hard to fathom idea of what it's like to watch your friends and loved ones die, one after the other, while you're helpless to stop it or even understand it. The dance beautifully and powerfully sets the stage of what's to come. The music continues with well-chosen '80s songs like "Who Wants to Live Forever" and "Under Pressure" (which my friends at Minnesota Theater Love informed me are all Queen songs - I'm a nerd), appropriately placed within the storytelling to heighten the feeling of the scene.

As with all New Epic shows, The Normal Heart has a very specific, consistent, and starkly beautiful look, a clarity of design that leads to strong storytelling. Shades of black and grey predominate, with red blood the only pop of color. Three industrial gray desks line either side of the Lab's stage space, with mismatched office chairs and dated phones the only adornments, drawers holding the occasional prop piece. A raised platform at the back of the stage provides a space for the doctor's office, where Dr. Brookner presides in her wheelchair, hauntingly empty when not in use. Most of the actors are on stage for most of the show, sitting in the desks at the side, sometimes watching the action, sometimes turned away. A few times an actor jumps up on a desk to lend a bigger impact to Kramer's impassioned monologues.

The play is centered around the character of Ned, with most scenes featuring him in conversation with other characters. In the same way, this cast is centered around Michael Wieser, who gives a beautifully natural, raw, believable, and passionate performance. At times adorable and funny, at other times an antagonist jerk, Michael makes the character of Ned someone you root for despite, or perhaps because of, his flaws. He's equally good with all of his scene partners in this strong seven-man and one-woman cast, who form a true ensemble. As the doctor desperately trying to get a handle on this disease and stop its spread, Michelle O'Neill does all of her acting sitting down at the back of the stage, yet still manages to convey to the audience a sense of outrage and frustration. As Ned's lover Felix, JuCoby Johnson once again brings complexity and heart to the role of the sweet boyfriend. The always excellent Zach Curtis is Ned's brother Ben, who supports his brother... to an extent. The scenes between the brothers are some of the most emotional of the play. Rounding out the cast are Antonio Duke (as the southern charmer), Torsten Johnson (delivering one of the most tragic monologues in the play), Adam Qualls (who both made me laugh and broke my heart), and Grant Sorenson (representing both the enemy and deceased loved ones). I'm very excited to see how this terrific cast works together in an entirely different play.

They say that the personal is political and the political is personal. This play is both, in the writing and in the telling. As one of the characters says, we lost a generation of men, of artists, to this horrible disease. This production, as all New Epic productions do, brings that fact into stark reality and makes the audience viscerally feel the confusion and devastation of the situation. And while we now view this play as a powerful historical play about a terrifying and devastating time in our past, the truly remarkable thing is that it premiered while this was actually happening. That, my friends, is the revolutionary power of theater. Thirty years later the fights around AIDS and gay rights have changed, but the need to fight, about these and many other issues, has not. I look forward to what Coriolanus has to add to this story (ticket information and performance schedule for both shows here).


*My colleague Kendra Plant interviewed Joseph Stodola about his work and vision, you can read it at the Artfully Engaging blog here.