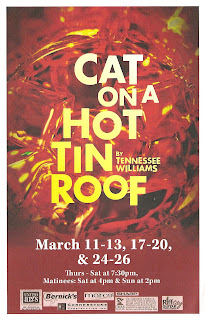 "Mendacity is the system we live in. Liquor is one way out, death is the other." Oh Tennessee Williams, no one does tragedy quite so beautifully as you! Even though his plays are filled with despair, anguish, and pain, they make me so happy. Especially when the poetic language and tragic relationships are brought to life as beautifully as they are in Pioneer Place Theatre Company's production of Cat on a Hot Tin Roof. Set in the back of a 100 year old building in downtown St. Cloud, "Central Minnesota's Premiere Professional Theatre" often attracts talent from the Twin Cities, as it has for this show. Directed by one of our best directors, Craig Johnson, this Cat features a cast full of Twin Cities favorites. So I happily made the one hour drive through a wintery precipitation mix to St. Cloud (where much of my extended family lives and where I went to college) to take in some quality theater at a new-to-me location (and eat the best pizza in the world at House of Pizza just across the street). If you're a theater-lover in the St. Cloud area, make plans to see this show before it closes this weekend. And if you're in the Twin Cities, I know there's more theater offered than one person could possibly see (believe me, I've tried), but if you're interested in some beautiful Tennessee Williams tragedy, this one is worth the drive.

One hot, tense night on a Mississippi family plantation unfolds over three acts. Act I establishes the relationship between favored younger son Brick and his wife Maggie. Brick is a former athlete, hobbling around on crutches due to a broken foot from a drunken escapade. He doesn't seem to care much about anything, except drinking, since the death of his friend Skipper, whose friendship he calls the one true thing he ever had in his life.  He's completely shut out his wife, and Maggie, as desperate as a cat on a hot tin roof, is trying to get back in and convince him to start a family and run the plantation. Act II features a confrontation between Brick and Big Daddy, who have in common a cruelty to their wives (their identical response when their wives say they love them: "wouldn't it be funny if that was true"). Big Daddy doesn't know what everyone else knows - he's dying of cancer - until Brick spills the beans. In the final act the family breaks the news to Big Mama, and older son Gooper and his wife Mae unveil their plans for the estate. Nothing is resolved, and this dysfunctional family must somehow continue after this eventful night.

This play is a true ensemble piece, and everyone in this twelve-person cast (including four children, adorable monsters all) contributes to its success. As Brick, Casey Hoekstra never leaves the stage, even when conversing through the bathroom door. But he probably speaks the least, mostly conveying Brick's just barely hidden rage and despair through his facial expressions and physicality, constantly moving away from people as he hops around on one foot with athletic grace, a drink always in his hand. Abby DeSanto's Maggie doesn't stop talking throughout the first act, bringing desperation, strength, and neediness necessary for the role. David Coral and Karen Wiese-Thompson are heart-breakingly wonderful as Big Daddy and Mama, bringing depth to these complicated relationships. Rounding out this fine cast are Jay Terry (Pioneer Place's Artistic Director) and Miriam Schwartz as Gooper and Mae, and Dann Peterson and David Tufford as party guests Reverend Tooker and Dr. Baugh.

The Pioneer Place theater is an intimate space, with several rows on the floor in front of the stage and a half dozen or so on an incline above them, providing a nice unencumbered view of the stage. The entire play takes place in one room, a bedroom in the plantation house, nicely represented by KateLynn Rentz's scenic design that includes a visible porch on one side and hallway on the other. Michael Anderson's lovely period costumes, from dresses to suits to silk pajamas, give a sense of time and place.