"The Dutchman / The Owl Answers" at Penumbra Theatre 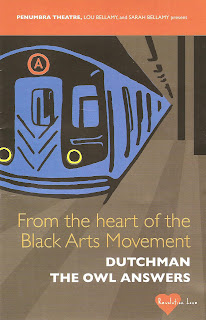 In one of those strange theater-going coincidences, the night after I saw two one-act plays at the Guthrie, I attended opening night of Penumbra's presentation of two one-act plays. Both paired plays by different playwrights linked by a common theme. But unlike the theater comedies The Critic and The Real Inspector Hound, The Dutchman and The Owl Answers are dense and meaty dramas dealing with heavy issues. They might not make you laugh (except, occasionally, uncomfortably), but they will definitely make you think. Written in the '60s as part of the Black Arts Movement, these plays take an unforgiving look at the racism, sexism, and classism of the day, that still have implications in today's world. A stellar ensemble cast and top-notch production design tie the two very different plays together and highlight the playwrights' messages. Though they are not easy to watch and I can't say I understood everything that was going on, I certainly came away with much to chew on, and a greater understanding of our shared history. Which is pretty much a given at Penumbra Theatre.

The Dutchman (written by Amiri Baraka, directed by Lou Bellamy)
In what is essentially a two-person show, a white woman named Lula meets a black man named Clay on a train. While he seems like a perfectly nice man in a suit, she obviously is a damaged and not entirely sane person. Lula seduces Clay, provokes him with racial slurs to the boiling point, then disposes of him as she moves on to her next victim.

The Owl Answers (written by Adrienne Kennedy, directed by Talvin Wilks)
In contrast to the gritty realism of the first play, The Owl Answers is a lyrical, fantastical story that moves across time and space. A woman named Clara goes on a journey of identity after finding out that her father, a wealthy white man for whom her black mother worked, died. Famous English writers and historical figures appear as she goes to England to find her ancestors, while at home she searches for men on the train to stand in for the father she never knew. With characters named "God's Dove," "Goddam Father," and "Anne Boleyn," you know you're in for a wild ride. Though inexplicable at times, it's quite beautiful in its mystery.

Both plays take place on trains, at least partially, so the same set is used for both. The gray, dismal, and realistic train from the first act remains for the second, whereupon it undergoes a transformation. Walls are removed, the train turns 90 degrees, and it becomes something else entirely. The fantasy of The Owl Answers is aided by the fantastical costumes (with some nice ties to those seen in The Dutchman) and the sound design that creates some spooky cool effects of echo and varying dynamics (scenic design by Maruti Evans, costume design by Mathew LeFebvre, sound design by Kevin Springer).

Another thing both plays have in common are brave, bold, raw performances. In The Dutchman, Kate Guentzel is believably crazy, her every move unpredictable, her behavior seeming to stem from some unspoken hurt. Nathan Barlow is the sane one she plays off of, until he snaps, powerfully delivering a monologue about what it's like to be a black man in America. The Owl Answers is almost a one-woman show, centered around Austene Van's painfully raw performance, with nice support from the ensemble including Jamecia Bennett as her mother and H. Adam Harris as the ever present bird hovering over the proceedings. Much of the ensemble (which also includes Brian Frutiger, Neal Hazard, and Peter Moore) performs without saying a word, sometimes in masks, but still manages to make the character clear.

Penumbra Theatre does such great work that often transcends theater. This pairing of two plays that make up a whole story are no exception. Penumbra is one of the jewels of the Twin Cities theater scene, and if you've never been to their warm and welcoming St. Paul theater space, make this your introduction (continuing through March 27).