"Dracula" by Collide Theatrical Dance Company at the Ritz Theater 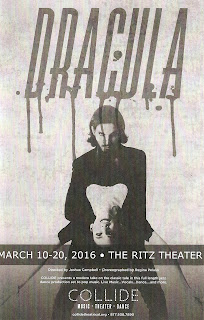 Collide Theatrical Dance Company is now in their fourth season of creating "original Broadway-style jazz dance musicals." As a theater geek who doesn't know much about dance but loves to watch it, Collide provides an accessible and theatrical way to get into dance. I've seen all of their productions over the last four seasons, and their newest creation Dracula may just be my favorite of them all. Collide is at their best when they let the dancing do the talking, as they do here, telling this modernized story of the iconic Dracula strictly through movement and music. A live band accompanies this fantastic troupe of dancers as they perform innovative and evocative choreography to a wide variety of popular songs reinvented to fit the story. Created by Artistic Director and choreographer Regina Peluso and director Joshua Campbell, this Dracula truly is a perfect collision of dance, music, and theater to create a new and exciting form of storytelling.

If you want to know what's going on plot-wise, read the summary in the program before the show. Or just let the music/dance/theater collision unfold before you, you'll get the gist of it. The basic premise is this: Dracula enters our modern world (evidenced by the man-bun), observing these strange beings known as humans, his otherness apparent in the fact he's the only one not dancing (kind of like me at a dance party). His only friend is a crazy woman in an asylum (you can tell she's crazy because she has curly hair). Dracula disrupts a wedding by biting the bride (a vampire's gotta eat) and sets his sights on a married woman. But the jilted husbands and their friends don't understand that, like all of us, our Dracula just wants "Somebody to Love," and chase him down to the end.

Michael Hanna makes one creepy/sexy/cool vampire, who's also incredibly sympathetic. Although not dancing, he does have a powerful physical presence, and sings several of the songs with the band. He's such an expressive and captivating singer that it's nearly impossible to take your eyes off him. But do try, because there's some fantastic dancing to watch too. The talented company includes Renee Guittar as the object of Dracula's obsession, Tony Vierling as her square husband (both fresh off a thrilling A Chorus Line at the Ordway, along with Rush Benson), Jami Snively as the innocent bride turned wild vampire, Kevin Iverson as her sweet and confused husband, and choreographer Regina Peluso in a wildly gleeful performance as Dracula's crazy friend. Everyone in the ensemble creates a unique and specific character through dance, aided by the costumes that look like street clothes but still allow for movement.

As usual with Collide, they have picked the perfect songs to tell the story, and they sound great as performed by the five-piece onstage band under music director Doug Rohde, with additional vocals provided by Katie Gearty. In their hands harmless fun pop songs like "Every Breath You Take" and "I Want You to Want Me" become something dark and sinister. Even "My Favorite Things" has an eerie quality. Whether instrumental or sung, the score of this show really sets the tone of the storytelling. And while I don't know much about dance, I know that this choreography is fun to watch and really defines each character as it tells the story.

Through music, dance, and theater, this new original production of Dracula cast such a spell over me that walking out into the bright spring sunshine was a bit of a shock after spending time with its delicious darkness. With a run time of under 90 minutes including intermission, it's a fun and different form of entertainment that's accessible to theater-, music-, and dance-lovers alike. But only five performances remain, so make plans to head to the Ritz Theater (a theater I am falling more in love with as a performance space as companies make good use of its bones) in Northeast Minneapolis soon! (Discount tickets available on Goldstar.)