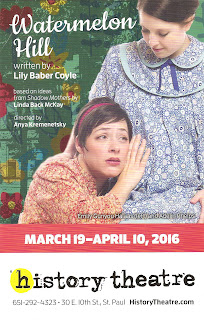 The History Theatre in St. Paul is committed to bringing new plays and musicals to the stage, usually inspired by true events in Minnesota history. Their yearly Raw Stages festival, a series of workshops and readings of new works, often results in full productions in the following season or two. But I often wonder, what happens next? After a new play or musical is developed, produced, and well-received, where does it go? In the case of 2001's Watermelon Hill, it comes back again 15 years later. As much as I love seeing new works of theater on History Theatre's stage, I'm thrilled that they brought this wonderful old new work back to the stage, giving it a fresh new production. Inspired by historical events, Watermelon Hill tells the stories of three young women in the mid '60s, pregnant and unmarried, sent in shame to St. Paul's Catholic Infant Home to wait out their pregnancies, deliver their babies, give them up for adoption, and then leave and never look back. Surprisingly light and funny for such a somber topic, the play brings light to the all too familiar tale of the challenges and lack of education and choices facing women in the past, and perhaps to a lesser extant, even today. Along with The How and the Why and Nina Simone: Four Women, it's another fantastic choice of theater to present during Women's History Month.

Playwright Lily Baber Coyle adapted the book Shadow Mothers by Linda Back McKay*, about her own experience at the Catholic Infant Home. The play focuses on three mothers, and tells their stories through monologues 20 years after the birth of their babies; scenes at the home, where in many ways they're just normal girls, reading magazines and eating junk food; flashbacks to their life before their pregnancies; and fantasy sequences. That may sound confusing, but it's actually a clever way to tell what is essentially a memory play, with all the colors, impressions, and oddities of memory. And it's also very easy to follow, thanks to the clear direction by Anya Kremenetsky and lighting by Kathy Maxwell that quickly identifies whether we're in the future, past, or some crazy dream.

I cannot think of three better actors to play these young mothers than Aeysha Kinnunen, Adelin Phelps, and Emily Gunyou Halaas. I always enjoy seeing all three of them on stage because they each bring a unique spark and spirit to their characters, as they do here. Adelin's Sharon is the youngest of the three mothers, adorably sweet and simple. She's always fibbing about how great her life is back home, but you get the sense it's for her benefit as much as anyone else's. Emily's Joan is the mature one of the bunch as she attempts to rationalize her way through the experience without getting emotionally involved. And since she's Jewish, she's always questioning the Catholic way of doing things, never getting a satisfactory answer (I love a good Catholic joke!). Aeysha's Leah is the most conflicted of the three, torn between giving away her baby and continuing her education to become a lawyer, or keeping the baby and going home to help her mother at the family lake resort. But we know how this story ends, which doesn't make the eventual conclusion any less devastating. All three actors believably play the youth, innocence, and naivety of these girls, and in the monologues 20 years later, we see a maturity, a gravity, as the effect of this experience takes its toll on their lives and relationships.

The story is about these three women, but we learn more about them through their relationships with others, which is where Janet Hayes Trow and Sean Dillon come in, playing dozens of characters. Janet is a supportive mother, a not so supportive mother, a stern nun, and every woman in between. Sean is equally believable as a kind but in-over-his-head priest, a thoughtless jerk, and a no-nonsense doctor. Both actors quickly and easily establish these characters, many of whom are only seen in one short scene, that allow us to better understand our girls and their lives.

How do you design a set that works for this memory play, with scenes taking place at many different times and locations? Rick Polenek's solution works beautifully. The stage is bare, with a cross-shaped platform, three prongs of which serve as the girls' beds. Each makeshift bed has a drawer under it wherein are stashed bedding, props, and costume pieces (smartly designed by E. Amy Hill). The large and imposing back wall has three massive doors that slide open or shut with a boom. Occasional image projections further define place.

There's a scene in which Leah imagines what it would be like if the roles were reversed. The man becomes suddenly pregnant, and the woman blames and excuses her way out of responsibility. We laugh, because isn't it funny to think of men being pregnant! But it's not funny, it's incredibly telling about the inequality of gender roles, especially when it comes to unplanned pregnancy and who gets left holding the bag (spoiler alert: it's always the woman). Moments like this are how the play deftly mixes in social commentary with humor and entertainment. It reminds me of my favorite quote from Mad Men (another great piece of art about women's experiences in the '60s), when Peggy says to her married lover who has decided to end their relationship, "well aren't you lucky, to have decisions." Leah, Sharon, and Joan didn't have choices in what to do about their unplanned pregnancy, so they went with the only decision available to them at the time, a decision that remained with them for a lifetime.

I am grateful to the History Theatre for continuing to develop new works of theater inspired by Minnesota history, and for bringing back past work they've developed. Watermelon Hill is a gem of a play, one that speaks to women's experiences with humor, intelligence, and compassion (continuing through April 10).


*Read my blogger colleague Kendra Plant's interview with Linda Back McKay at her blog Artfully Engaging, where she also shares her personal connection to the story.