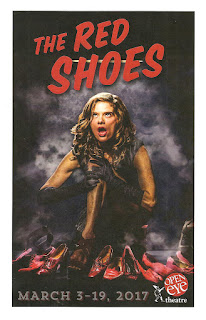 You may be familiar with the Hans Christian Andersen story The Red Shoes, in which a vain little girl with pretty red shoes is cursed so that her shoes will never stop dancing. But you may not recognize what the ingenious minds of Joel Sass and Kimberly Richardson have turned it into. Yes there are a few (hilarious) runaway dancing scenes, but their 80-minute show at Open Eye Figure Theatre is more 20 Century creepy noir thriller than 19th Century fairy tale. I'll let director Joel Sass describe it to you: "Equally humorous and hair-raising, our adaptation of The Red Shoes draws inspiration and influences from the vintage detective novels of Raymond Chandler and Dashiell Hammett, case studies of amnesia and multiple personality, and black and white film noir movies of the 1940s. Like that cinematic genre, The Red Shoes evokes a highly stylized landscape of convoluted mystery, subconscious manacle, fever dreams, and existential crisis." My immediate thought at the end of the show was, "how do people think of such things?" The Red Shoes is something so curious and unique, odd and chilling, inventive and charming, it's thoroughly captivating from start to finish.

The heroine of this Red Shoes adaptation is not a vain little girl, but rather a shut-in who's afraid to leave her apartment, or let anyone in, and is investigating the disappearance of another woman who once lived there. She was hit by a train. Or fell from a roof. Or hung herself. Or maybe all three. The woman receives a few visitors and packages, tells herself stories using an adorable tiny set and puppets, and has a bulletin board filled with scraps, photos, and notes like "push" and "kill" (think Season 1 Carrie Mathison). If you're looking for a linear narrative, look elsewhere. This show is a mish-mash of wordless scenes, puppet shows, hallucinations, recollections. I'm still not entirely clear what happened to whom and when, but I happily went along for the ride.

Kimberly Richardson, adept at physical transformation, is the sole (visible) performer and plays at least five characters (and wears at least six different pairs of red shoes, from roller skates to stilletos). In addition to the woman in the apartment, she's also the missing woman, the landlady, a newsboy, and a mysterious woman in a trench coat whose dialogue mostly consists of muttering "Scheisse" (my personal favorite swear word). One character exits one side of the stage followed by the entrance of another character on the opposite side of the stage, leading to many "how'd they do that?" stage magic moments. How they did that is with three backstage performers (Ariane Mass, Rick Miller, Noah Sommers Haas) manipulating props, casting shadows, and creating misdirection.

The design of the show is inseparable from the performance, perhaps moreso than I've ever experienced. Director Joel Sass also designed the set and props (natch), and everything is incredibly detailed and rustically charming. There's a heck of a lot of choreography that goes into making sure everything is where it's supposed to be and does what it's supposed to do, and Kimberly and the other performers pull it off beautifully, even when things don't go exactly as planned. This is one of those shows that would be just as fun to watch from backstage. Lighting (Bill Healey) and sound (Sean Healey) are also intricately related, with blinding flashes and recorded sounds coming from specific parts of the stage. Morgan Potter's costumes fulfill the task of instantly defining character and being easy to get into and out of quickly. All of the elements of design and performance come together to create the magic of the experience.

When I left Open Eye last night, I felt a little like I did when I left a super awesome yoga practice this morning. I felt a little bit in a trance, like my mind and spirit had traveled somewhere else entirely from where my body was, and it took a minute to re-adjust to this plane of existence. Such is the magic woven on that little stage by Kimberly, Joel, and the whole team.

The utterly unique and magical The Red Shoes continues at Open Eye Figure Theatre through March 19.