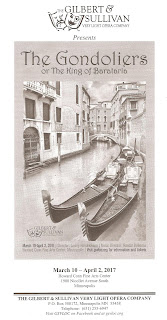 If you like your opera very light, and very silly, and very enthusiastically and traditionally performed by a large cast and orchestra, Gilbert and Sullivan Very Light Opera Company is for you. I only "discovered" this 30+ year old company a few years ago, but since then I've learned that Gilbert and Sullivan, everyone's favorite 19th Century musical-comedy-operetta composing team, wrote many more shows that just the frequently produced H.M.S. Pinafore and Pirates of Penzance. GSVLOC's annual spring show (is it spring?) this year is The Gondoliers, or The King of Barataria. Director Lesley Hendrickson notes in the playbill that it's "probably the most joyous of the G&S operettas" and that it was "the very first theatrical performance requested by Queen Victoria at Windsor castle after the death of her beloved Prince Albert" (fans of Victoria on Masterpiece, take note). I think the queen would be pleased with this production as well.

Gilbert and Sullivan seem to have fallen into a storytelling habit and use the same familiar tropes in many of their shows. But so did Shakespeare, so that's no knock on creativity, but more an acknowledgement of using what works. Where Shakespeare often relied on people dressing in disguise, G&S rely on the switched at birth phenomenon that means people aren't who we think they are, leading to a surprise happy ending. In this case, the titular Gondoliers are two brothers in Venice, one of whom is secretly the heir to the throne of the fictional land of Barataria (which seems to be vaguely Spanish). Or are they?! When the parents of the young duchess to whom this crowned prince was secretly wed when they were infants search for the heir to make him King and their daughter Queen, they're surprised at the mess they find. The brothers both act as King (leaving their new wives behind in Venice, evidence of their accidental polygamy) until their childhood nurse can come to identify them. When she finally does arrive, who she points to as the true King of Barataria comes as a great surprise (or at least to anyone who's never seen a G&S operetta before).

As per usual with Gilbert and Sullivan, The Gondoliers is full of fast, funny, clever lyrics. It's a very entertaining and enjoyable score, and the very large backstage orchestra under the direction of Randal A. Buikema performs it well (oh how I wish I could see them in their cramped quarters!). The very large cast also performs well and with great expression, even down to the two child members (the adorable Liam Hage and child wonder Mary Bair), although I would love to see more diversity in the cast. Highlights include Michael Burton and Ryan Johnson as the "gondolieri," Blanka Melbostad and Maggie Burr as their brides, Jim Ahrens and Katerina Middeldorp as the parents of the new queen, and Cassie Utt and Philip Eschweiler as said queen and her true love (with some truly lovely duets).

It always amazes me how they can fit such a large cast on such a small stage at the Howard Conn Fine Arts Center (located in Plymouth Congregation Church in South Minneapolis). The streets and canals of Venice are quite charmingly represented by the two-dimensional set pieces, and there's even a boat that moves in from which characters disembark. The second act sees a transformation to the royal court, with a vaguely Spanish or Moroccan feel (set design by Larry Rostad).

GSVLOC specializes in one composing team, and after 30 years they know what they're doing. If you're a fan of Gilbert and Sullivan, you'll definitely want to check out this company and the fun, light, entertaining Gondoliers (continuing through April 2).