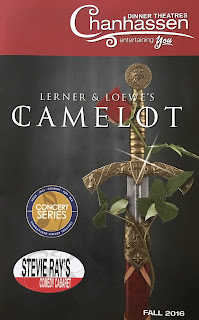 The rain may never fall till after sundown.
By eight, the morning fog must disappear.
In short, there's simply not
A more congenial spot
For happily-ever-aftering than here
In Camelot.

Even in a musical, this idyllic world cannot last forever. The problems of the real world - war, greed, betrayal - come crashing in despite the legendary King Arthur's dreams of peace. Perhaps turning a blind eye to reality is not the best way to keep the peace, but it sure was nice while it lasted. Even though I have some issues with the book, Chanhassen Dinner Theatres beautifully brings the mystical and idyllic world of Camelot to life with gorgeous design, a fantastic cast, and beautiful music.


Lerner and Loewe's retelling of the King Arthur legend begins with King Arthur's arranged marriage to the spunky Guinevere, and a meet cute in the woods before she realizes who he is. They form a partnership, and Arthur, made king when he pulled the legendary sword Excalibur from the stone, dreams of a world with no borders, where the rule of the land is not "might is right" but "might for right." Where brave and noble knights come together to fight not for greed or land, but for justice and to defend the downtrodden. Arthur is joined by knights from near and far, including Lancelot from France. Lancelot loves and is loyal to Arthur, but he also falls in love with Guinevere. They admit their love to each, but vow to remain loyal to Arthur, until Arthur's evil son Mordred sets them up, resulting in the downfall of Camelot. But in the end Arthur stays true to his ideals, forgives Lancelot and Guinevere, and sees hope for the future in a young boy with dreams of being a knight.

From a feminist perspective, Camelot leaves much to be desired. It definitely doesn't pass the Bechdel test; Guinevere is the only female character who speaks (although none of the minor characters speak or are at all fleshed out). Like in the myth of Adam and Eve, it's a woman's sin that brings about the downfall of the Utopian world. Guinevere is punished for her crime of adultery (a sudden love with no foundation) by being sentenced to be burned at the stake, a fate met by tens or even hundreds of thousands of women in medieval Europe, typically strong, independent women who threatened the patriarchy. A fate from which she's saved by a man (not Arthur, but Lancelot). Not that Guinevere is a week character; she is a strong woman and a partner to Arthur, although her role is definitely defined by the limitations of the era and consists mostly of telling Arthur how clever he is. But I've been enjoying seeing women's stories told by women on stage lately, and Camelot is definitely not one of them.

Still, there is much to enjoy in this Camelot. Nayna Ramey's scenic design is lovely and mystical, with fairy-like windswept trees and beautiful medieval tapestries. As usual, Rich Hamson's costumes do not disappoint. Guinevere wears a half dozen gorgeous gowns, none more so than the light as air flowing blue-patterned hooded cape she wears in her first scene. Arthur and his knights look handsome and regal in their armor, and the fairy creatures are earthy and magical. Although this isn't a dance-heavy show, choreographer Tamara Kangas Erickson provides some wonderful moments, including the Lady of the Lake Nimue's haunting flowy seductive movements (beautifully danced by Renee Guittar) and the jousting scenes, represented by two dancing fighting men in horse heads (Lars Lee and Brandyn Tapio). And as always, this classic score (including such favorites as "The Lusty Month of May" and "What Do the Simple Folk Do?") sounds beautiful as performed by the onstage (behind a screen) orchestra directed by Andrew Cooke.

Director Michael Brindisi has assembled a fantastic cast, although I do wish that the talent-rich ensemble had more to do than just strut around in pretty clothes. There's a reason Keith Rice is the Chan's biggest and longest reigning star; he's just wonderful as King Arthur, wide-eyed and idealistic at the beginning of the story, then devastated by betrayal, staying strong through it all, and with that big booming baritone. Aleks Knezevich is a dreamy Lancelot, beautifully delivering the most romantic song in the score, "If Ever I Would Leave You." David Anthony Brinkley fortunately interrupted his "full-time retirement" to play both the magical Merlyn (who inexplicably disappears near the beginning of the show, never to appear again) and the kindly old Pellinore. Tony Vierling makes a second act appearance as the deliciously oily villain Mordred, his voice just dripping with maliciousness. And finally, the star of this show is Helen Anker as Guinevere. The Brit was last scene in the Twin Cities as Eliza Doolittle in the Guthrie's My Fair Lady, and she is, again, an absolute delight to watch. I hate to compare anyone to Julie Andrews (who originated both roles on Broadway), but if you can't get Julie Andrews, Helen Anker is the next best thing - an authentic British accent, such spirit and range of emotion, and a lovely clear voice.

While I've learned that Camelot isn't my favorite musical, there is much to love in Chanhassen's production of the Lerner and Loewe classic, namely the fantastic cast, gorgeous design, and wonderful music. Camelot continues through February 2017.