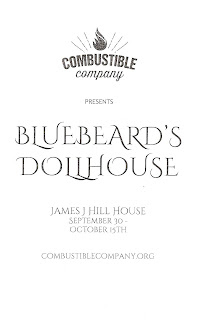 If the candy and decorations at Target haven't made you aware that Halloween season is upon us, Combustible Company's immersive and mobile merging of two disastrous marriage tales Bluebeard's Dollhouse will leave no doubt. It's performed in multiple locations in the gorgeous historic mansion that is the James J. Hill House, and it's super creepy. It's definitely not your typical night at the theater - walking up and down grand or narrow staircases, entering rooms simple or elaborate, and seeing scary looking dolls everywhere you turn. If you like a good fright, and appreciate invention and creativity and, well, something that's just different, Bluebeard's Dollhouse (continuing through October 15) is the experience for you. I'm not very fond of scary things and horror (Halloween is a non-holiday in my life), but I appreciate the artistry that goes into creating this very detailed world at this incredibly cool location.

Before you go, it might behoove you to read the Wikipedia plot summaries of Norwegian playwright Henrik Ibsen's well-known play A Doll's House (and also watch Season 2 of the hilarious locally filmed web series Theater People) and the lesser known French folk tale Bluebeard. In the former, Nora struggles under the confinement of being a wife in the 19th Century, and decides to leave her husband Torvald after his horrible treatment of her upon learning the shameful secret that she borrowed money to help him (hint: letters). In the latter, the wealthy Bluebeard kills his wives, which his new wife discovers when she enters a forbidden room and finds their bodies (hint: keys). Both comment on the constrictions that women have historically (and maybe still do today) faced in marriage (and are fantastic validations of the unmarried life). And both stories are dark and disturbing, as is this piece.

An audience of about 35 people is split up into a half dozen small groups and led to different rooms around the mansion. Everyone sees the same thing, but in a different order, and with a different guide. The logistics run quite smoothly, and in general you can't go wrong if you just go in a room or stand in the hallway and watch. It's a totally immersive experience, but not interactive; the cast won't ask you to participate or talk back (except maybe in a creepy tea party). Rather than telling a linear story, a short vignette is performed in each room, featuring Nora and Torvald, or Bluebeard and his wife, or some amalgamation of the characters. This is where it's helpful to have some idea of the plot, so you have a framework on which to place the scenes.

Everyone in the eleven-person cast is incredibly committed to the experience. It's not a typical experience for actors to be face-to-face with the audience, in charge of guiding them from space to space while still playing a character, but they all pull it off beautifully. Basically everyone is a different version of Torvald/Bluebeard or Nora/wife, as their story plays out in pieces over and over.

The design of the piece is gorgeous, in a creepy sort of way. The cast is dressed in shabby chic period garb in shades of blue, white, and grey (costume design by Alissa McCourt and Nico Swenson) with pale make-up spattered with blue paint. There are creepy dolls everywhere, even sewn into costumes (let's face it, dolls are just creepy, aren't they?!). The bright spotlights create effectively disturbing shadow effects, and some of the rooms showcase video projections onto walls or objects (video design by Jim Peitzman). No props, scenic, or lighting designer is listed in the program, so I can only assume that "the company" is responsible for the super creepy overall effect (including writer/director Kym Longhi and one of the Bluebeard/Torvalds Erik Hoover, Co-Artistic Directors of Combustible Company).

This is the fourth theater production I've seen at the James J. Hill House and definitely the most immersive and ambitious use of the space. It's exciting to see theater companies create theater in site-specific spaces such as this. Head to the beautiful mansion on the hill overlooking downtown St. Paul between now and October 15 to see it in a whole new light (or rather, darkness).