"The Venetian Twins" by Theatre Forever at the Southern Theater 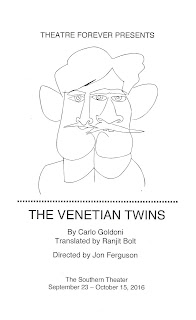 Wikipedia tells me that Commedia dell'arte is "a form of theatre characterized by masked 'types' which began in Italy in the 16th century." Theatre Forever is presenting the 18th century Italian comedy The Venetian Twins in such a style, with broad, exaggerated, physical comedy, as part of the Southern Theater's ARTshare program. Even though much of it is not really my kind of humor (like Dr. Jody Kimball-Kinney, I find the frequent "erotic pantomimes" to be more gross than funny), it's quite clever and very well done, with total commitment by the dozen members of the ensemble under the clear direction by Jon Ferguson.

In fair Verona, two estranged twins from Venice arrive on separate missions. Zanetto, wealthy but an idiot and a jerk, is about to enter into an arranged marriage with Rosaura, a doctor's daughter. Tonino, noble but poor, arrives to marry his beloved Beatrice. You can see where this is going - the two men's stories intersect, and people think Zanetto is Tonino, or Tonino is Zanetto, causing all kinds of crazy hijinks until the matter is sorted out. It's a whole lot of nonsense, but watching them get there is great fun.

A few thoughts about the show:

The Venetian Twins continues through October 15 at the Southern Theater. Check it out for some fun, silly, escapist entertainment.