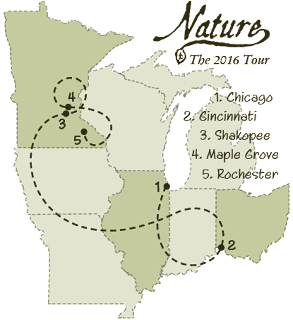 A few weeks ago, I spent four days and three nights in the Boundary Waters Canoe Area Wilderness, just outside of Ely, MN. Even though I've been to New Zealand and Northern Alaska, this was the most in Nature I've ever been. After paddling into the nationally designated wilderness area, the only signs of civilization I and my six companions saw were the campsite fire pits and latrines (if you can call a copper stool with a hole in it standing in the middle of the woods "civilization"). Nothing soothes my fears and relieves my stress like being in Nature. Those four days were like a balm to my soul; the challenge is to carry that feeling with me back into civilization. TigerLion Arts' outdoor walking play about the friendship between Ralph Waldo Emerson and Henry David Thoreau, simply titled Nature, challenges the audience to escape from civilization for an hour or two and feel Nature's balm. After touring around the Midwest, it was at the beautiful Elm Creek Park Reserve, just north of Maple Grove, last weekend. This was my third time seeing it and the third location (after the Minnesota Landscape Arboretum and my alma mater St. John's University), and I will continue to go see it every year they continue to do it. It truly is one of my favorite theater experiences.

Nature tells the story of  writers, philosophers, scholars, Transcendentalists, and friends Ralph Waldo Emerson and Henry David Thoreau. Both found inspiration in Nature, but in different ways - Waldo the minister and lecturer who traveled the world bringing his words to the people, Henry the pencil-maker's son who preferred to live by himself in a cabin on Waldo's property. The story is told in four locations, with the audience following the cast from one location to the next, invited to take a walk and experience Nature for themselves, as these two men so loved to do.

The story begins at a church, represented by a row of pews and an altar located right next to the Eastman Nature Center, where Emerson and Thoreau break into a traditional church service to proclaim the glory of Nature. After a brief introduction of the two men, charmingly told by the ensemble with physical theater style, we move to the second location - in the middle of the woods carpeted by fallen leaves. In one of my favorite scenes in the play, we watch Henry and Waldo walk and talk far away from us, exaggeratedly miming speech and action, as the ensemble behind us speaks their words as one. The third location is a quaint little open-air cabin, which serves both as Henry's remote solo cabin, and Waldo's home that he shared with his wife Lydian and their children. The final location is a field where Henry is growing beans and complaining about "progress." This is where the rift between the men first appears, Waldo arguing that some progress is necessary. The rift deepens back at the cabin, where Henry lives with Waldo's family while he is overseas on a lecture tour, only to come home and find that Henry has taken his place. The two men argue as we follow them back through the woods and to the church, where they're reconciled only after Henry's death when Waldo speaks at his funeral. All through the journey Nature is with them, lovingly watching over them and guiding them, and at the end reminds them that She is what brought them together in the first place.

As always, Emerson is perfectly portrayed by Tyson Forbes, the great-great-great-grandson of Emerson and one of the writer/ creators of this piece. Nature is obviously a labor of love for Tyson and his wife, writer/producer/director Markell Kiefer, co-Artistic Directors of TigerLion Arts, with their two adorable boys running around in costume making it a true family affair. They created the piece back in 2010 and continue to tour and develop it every year, and will take it to Concord next year for the celebration of Thoreau's 200th birthday. This piece is one of the best examples of "content dictates form" I've ever seen in the theater; there is no better way to tell this story of these two men, their friendship, and their reverence for Nature than immersed in Nature itself.

Much of the eleven-person ensemble returns from past years, along with a few new faces, with a great feeling of playfulness and trust among them. Alongside Tyson, the embodiment of his ancestor, tall and distinguished in black coat and top hat, Bear Brummel capably takes over the role of Thoreau from John Catron (who can currently be seen as an "adorably awkward" Edward in Sense and Sensibility at the Guthrie) with energy and earthiness, the yin to Emerson's yang. No one else could play the most important character in the play, Nature herself, than Norah Long with her golden voice, playful fiddle playing, and expression of pure joy and love on her face. Music (with original compositions by Dick Hensold as well as traditional songs) adds greatly to the experience, sung by Norah, the cast, and the volunteer community choir, and played on percussion by Nathan Gebhard and various pipes, flutes, guitars, and other instruments by Andrew Forbes. The entire ensemble is a joy to watch as they create these characters, their physical world, and the feeling of love of Nature.

There are so many wonderful things about Nature that I can't even begin to tell you about all of them (the whimsical sound effects, the exaggerated apple-eating, the charming letter delivery). It truly is something you need to experience yourself. Return to Nature, take a walk, watch the sky through the trees, be embraced by the earth, and let this talented group of artists take you on a journey that you'll never forget. There is just one more stop on the 2016 Nature for the Nation tour, in Rochester (more info here). But Nature never ends, and hopefully neither will Nature. Like the TigerLion Arts Facebook page or follow them on Twitter for information on the 2017 tour, which will take them to the East Coast but will hopefully also include a few Minnesota stops. This beautiful and important story, so well and appropriately told, needs to be heard and is an absolute joy to experience.*

Watch this video to get a small taste of what the experience of Nature can be.

*Some of this post is borrowed from what I wrote about past productions I've seen at Minnesota Landscape Arboretum and St. John's University.