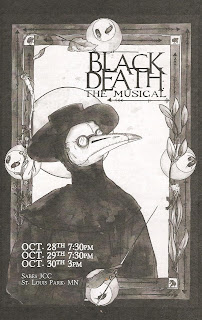 The new original musical Black Death: The Musical runs for three performances only, just in time for Halloween. I was invited to attend the final dress rehearsal a few nights ago. Writer Susan Woehrle and composer Scott Keever have created a well-researched piece with a unique musical style. They originally intended it to be for the Fringe Festival (read my fellow Twin Cities Theater Blogger Kendra's interview with Susan here), and it definitely has that feel. If you miss those Fringey musicals of August, enjoy dark humor and original music, and don't mind driving all the way out to St. Louis Park, you might want to check out Black Death: The Musical - this weekend only!

Set sometime around the Middle Ages, somewhere in Europe, Black Death focuses on the historical doctor Guy de Chauliac. People are dying of the plague at alarming rates, and Chauliac thinks regular bathing might help stem the tide. He meets a nun who wants to help solve another problem - the bodies piling up faster than priests can properly bury them. They take their ideas to Pope Clement VI, in hopes that he can help them. Meanwhile, Nicodemus the alchemist brings his son back to life after he dies from the plague, but something's not quite right with him. The two stories intertwine as the undead wage war against the living in a sort of historical/zombie fantasy mish-mash.

The music is written in a period style, but with a rock edge, and sung by a great cast that includes classically trained opera singers (Rodolfo Nieto plays two roles and is a highlight, and my opera-loving fellow bloggers at Minnesota Theater Love were already big fans of his). The three piece onstage band (led by composer Scott Keever on keyboard and guitar) sounds great, but unfortunately at the preview I attended they drowned out the singers on many of the songs. The sound issues, which hopefully they will resolve before this weekend, made it difficult to hear the lyrics, and therefore difficult to become fully engaged in the piece. Also, an intermission in a 90-minute piece is unnecessary and only serves to take the audience out of the story (if you read this blog regularly, you know how much I dislike unnecessary intermissions).

The minimal set includes just enough pieces to set the scene, but the costumes and make-up are more elaborate and really evoke the feeling of Middle Ages mixed with horror. I particularly love the dress that Amanda Weiss wears as a townsperson, etc., it's actually quite beautiful in a black death sort of way (costume design by Barbara Portinga, make-up design by Carolyn Blomberg).

Black Death: The Musical plays this weekend only at Sabes JCC Theater in St. Louis Park.  Check out the Facebook event page for more information.