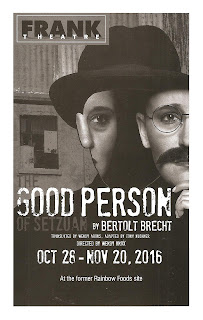 Yes, you read that right. Last night I saw theater at an abandoned Rainbow Foods in South Minneapolis. It was definitely the strangest place I have ever seen theater, but not the strangest place Frank Theatre has ever done theater. According to a note in the playbill from Artistic Director Wendy Knox, Frank used to do a lot of shows in a found space, until they settled into more conventional spaces like the Southern and the Ritz in recent years. Some last minute changes this year caused them to get creative again, and with the dearth of small theater spaces (just as we gained The Crane Theater, we lost Bedlam Lowertown), theaters need to get creative. Frank has made terrific use of this space in their latest production of a Brecht play - The Good Person of Setzuan. Frank + Brecht = weird, but weird in a creative, interesting, entertaining way. Although the 8 to 11:15 pm runtime was way too late and long for this morning person (can we not all just agree to start all shows at 7:30, and can't we edit super-long plays into something more manageable?), it's a very well-done, intriguing, thought-provoking, entertaining play in typical Frank style.

Walking through the double doors feels oddly familiar if you've ever been to a Rainbow Foods (are there any left anymore?). But this is no grocery store. It's been completely gutted, but you can still see the marks on the cement floor where the shelves used to be. In the huge bare grocery store part of the building, an entire tent city is set up. I'm not sure if or how it relates to the play; people were working on it and hanging out in it before, during, and after the show. Walking past this fascinating collection of odds and ends, you enter the loading area where the stage and chairs are set up. The atmosphere is cold, dark, and otherworldly, appropriate for what we're getting ourselves into. Actors appear all over the space, high and low, with doors and barrels and planks forming the set pieces. It's a truly unique and startling creation in this once empty space (scenery by Joe Staney, properties and lobby design by Kellie Larson).

The Good Person of Setzuan is like a gritty fairy tale. Three gods descend to earth in search of one good person. They find her in the city of Setzuan, a poor but kind-hearted prostitute named Shen Te, who gives the gods a place to stay even though she doesn't have much. When she complains that it's difficult to be good and still pay the bills, they reward her with 1000 silver dollars in the hopes that easing her money troubles will free her up to do more good. But things don't quite work that way down here on earth. Shen Te buys a tobacco shop, but soon finds herself taken advantage of by friends, neighbors, and lovers. She is forced to invent a male alter ego Shui Ta to protect herself. The play asks interesting questions about what is good, what sacrifices do we make to do good (no good deed goes unpunished), and how can we do good while still demanding respect.

This is a huge cast of 17 actors, many of whom play multiple parts. All are dressed in what must be the best Halloween costumes they've ever worn, extreme make-up included! My favorites are the three elegant gods, one silver, one gold, one bronze, with draping layers and matching hats - a wire globe set on a bowler had with dangling silver circles (costume design by Kathy Kohl). It's a lovely effect, and perhaps not coincidentally my favorite moments of the play are when the gods appear (played by Katherine Ferrand, Janis Hardy, and Ellen Apel). Other highlights in the cast include Patrick Bailey as the water seller/narrator, Virigina S. Burke in a dual role, one slightly more ridiculous than the other, John Middleton as the pilot that Shen Te falls for, and of course, our one good person, a sympathetic and believable Emily Grodzik. And they also sing. I'm not sure I'd call this a musical, but there is original music by Dan Dukich, which is appropriately bizarre.

The Good Person of Setzuan continues through November 20. Take a nap or get a coffee before you go. It's a long ride, but it's worth it.