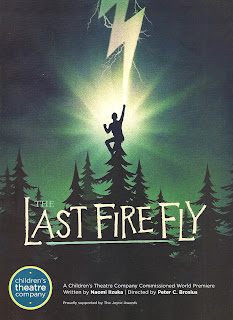 The new play The Last Firefly by Naomi Iizuka, commissioned by the Children's Theatre Company, feels like a new fairy tale for the modern age. The playwright has combined elements from several Japanese folktales and put at the center a child of a single mother who has never met his father and is living with an abusive stepfather. A lot of today's kids can relate to this situation in some way. Boom goes on a hero's journey in search of his father to help his mother, and along the way discovers his own strength. It's a familiar story, but one told in a new and modern way with some fantastic design elements to create an engaging 80-minute play.

A mother tells her son a story about a boy that is the child of Thunder. The son begins to believe that he is this boy, and his father is Thunder. The mother poo-poos the idea, until the stepfather gets violent and she urges him to run away, telling him the story is true. He goes in search of his father, enlisting help from those he meets along the way, including a mischievous monkey who calls him Boom. The climb up a friendly tree, capture Lightning, and journey to the clouds in hopes of finding Thunder. Thunder proves to be elusive, but justice is served, and Boom returns to his mother.

The five-person cast is a delight to watch as they bring this story to life. Ricardo Vázquez is (once again) totally believable as the earnest young boy. Joy Dolo is warm and maternal as his mother, Sun Mee Chomet is wildly fun as Monkey, and Stephanie Bertumen is strong and bright as Lightning. A cast-against-type Luverne Seifert is truly terrifying as the abusive stepfather, and also gets to show his comedic talent as the tree. They all get physical running and climbing around the set, and participating in some athletic fight scenes.

This show really is a feast for the eyes in its inventive design. Scenic and puppet designer Eric J. Van Wyck has created some wonderfully fantastical elements, including clouds, a flowing river, a large rock that's played like a drum and turns into a turtle, and a huge talking climbable tree. Helen Q. Huang's costume design helps to further define this world and its characters, lighting designer Paul Whitaker has created some striking moments, and composer/sound designer Victor Zupanc makes Thunder a real character even though he's never seen.

The Last Firefly is part whimsical and fantastical fairy tale, part sober story of the troubles of being a kid in today's world. CTC recommends it for kids eight and older due to the darker elements of the story. Continuing through November 13.