"The Parchman Hour" at the Guthrie Theater 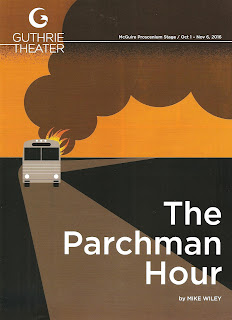 "Woke up this morning with my mind stayed on freedom. Hallelu, hallelu, hallelujah!" The closing number of the fantastic music-theater piece The Parchman Hour by Mike Wiley is so uplifting and inspirational. This "docudrama" about the 1961 Freedom Riders, in which primarily young people, black and white, from all over the country, came together to make a stand for desegregation of the bus stations of the South, is pretty heavy and difficult to watch at times. But in the end it left me with an overwhelming feeling of hope. We've come a long way in 55 years, people are no longer beat up by a mob of bigots for sitting in the wrong waiting room, but we have our own issues today (the play ends with a chilling recitation of the names of black men and women who have been killed by police in recent years). But I believe that there are more people in this country like those Freedom Riders, perhaps not as brave and selfless, but with our minds stayed on freedom, than there are like the people who stood in their way. If we stand (or sit) together, stand up for freedom, practice non-violence, and sing, we can get through this difficult time and achieve true justice and equality for all. At least that's how I felt leaving the Guthrie Theater last night; such is the power of The Parchman Hour.

You may be asking, like I did, "what's a Parchman?" I still don't know, but the title refers to the Mississippi State Penitentiary known as Parchman Farm, where hundreds of Freedom Riders* ended up after a long and dangerous journey through the South. To bide the time, and keep their minds off the horrible and abusive situation they found themselves in, they sang, told jokes, and acted out skits in a variety show they called "The Parchman Hour." The play is a bit of a variety show itself; rather than telling the story linearly, it consists of a series of songs and scenes from the Freedom Rides, often using the real Riders' own words as their mug shots are displayed on stage. This makes it a little difficult to write about (is it a play? a musical? a concert? a documentary?) but wonderfully entertaining to watch. It's a brilliant collision of art forms (music, theater, video projection, play-writing, and incredible performances) to tell this important story from our not too distant past in a way that clearly resonates with today's struggles.

In the playbill, Music Director Sanford Moore writes about the importance of music in African American history. Slaves sang and shared music as a source of hope, and that tradition carried into the Civil Rights Movement. These traditional songs, as well as songs of the time period (including the most amazing rendition of "If I Had a Hammer" I've ever heard, sung by the talented women in the cast), are beautifully woven into The Parchman Hour in a way that makes it impossible to think of telling the story without music. Songs of celebration, songs of sorrow, songs of determination to keep on that road towards freedom, all gorgeously sung by the cast and played by the four-piece onstage band.

Much like the Riders themselves, the 12-person ensemble is a beautiful mix of black and white, old and young, local favorites and welcome newcomers to the Twin Cities. And the even more beautiful thing is that while they all have one or two specific (historic) people that they play, they're also credited as "Actor 1-12" and play roles without regard to gender or race. Implying that the Freedom Riders truly were all one in their struggle, as we must all be one in our struggle. The cast is so across the board brilliant that I'm going to list them all. Terry Hempleman is terrifically terrifying and revolting as the prison warden and every other racist character in the story. Stephen Conrad Moore brings physical power and emotional sensitivity to the role of the hardened inmate forced to enact violence on the Riders. The ten talented actors playing the Riders include locals Cat Brindisi, David Darrow, Katherine Fried, Kory LaQuess Pullam, Nathan Barlow, and Sam Bardwell, and a handful of actors in their first (but hopefully not last) performance at the Guthrie - Jared Joseph, Kevin R. Free, Whitney Maris Brown, and Zonya Love. Each one gives their heart and soul to the performance, a true joy to witness.

Director Patricia McGregor, also a newcomer to the Guthrie, brings so much life, spirit, and urgency to the story, and makes the complicated non-linear storytelling fairly easy to follow. Clint Ramos' scenic design is deceptive in its simplicity, just two blank walls, a stairway, and some benches. But the blank walls are essential for the projection of actual video and photos from the 1961 Freedom Rides (projection design by Tom Mays), the sparseness allows the story and characters to take center stage, and the benches are constantly moved around to create new landscapes. Choreographer Carl Flink (who knows something about dancing on benches) has created some compelling movement/dance for the cast that feels both period and modern. Lastly, Katherine O'Neill's costumes include both smart period attire (love those Mad Men skinny ties) and prison shabby chic (those striped skirts are actually kind of cute).

There are two shows playing in the Twin Cities right now that, though historical, feel timely and urgent and necessary to see in this election season. One is Theater Latte Da's Ragtime, the other is The Parchman Hour at the Guthrie. Go see these shows that comment on and inform about today's struggles with injustice, keep your mind stayed on freedom, and then make them hear you by voting on November 8.

*For more information about the Freedom Riders, check out the Guthrie's play guide, available online.