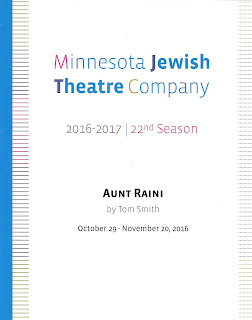 What happens when your beloved great-aunt, the woman who helped raise you and is your only remaining family, is also a Nazi war criminal? Or if not a war criminal, at the least a Nazi sympathizer and the woman responsible for creating propaganda films for Hitler. Of course I'm referring to Leni Riefenstahl, whose legacy remains complicated. Was she merely a talented artist and director whose subjects happened to include the rise of the Nazi party? Or was she an active part of the cause, and therefore responsible for the death of millions of people? Or is it possible that she was both of these things? The new play Aunt Raini, receiving it's world premiere at Minnesota Jewish Theatre Company, examines these questions by giving Leni a fictional great-niece in New York City who is with her when she dies at the age of 101 in 2003. While the play could benefit from another round of revisions, it's an intriguing concept and grapples with important questions about art and politics without offering any easy answers, with complex characters and relationships brought to life by a terrific four-person cast.

"Aunt Raini" is the nickname that Katherine (Heidi Fellner) gave her aunt (Maggie Bearmon Pistner) when she was a little girl, and she continues to use it. Therefore we don't know at the beginning of the play that Raini is actually the infamous Leni. When Katherine found herself without parents or any other family at the age of 12, Raini took her in and raised her in Germany, until she came back to the US for college. Raini is visiting her niece, now a successful art dealer in NYC, and although she's a bit prickly, they have an affectionate relationship. Katherine introduces Raini to her Jewish boyfriend Joel (Michael Torsch), and is afraid to leave them alone in case Raini gives clues about her real identity. When she does, Katherine says she's suffering from dementia. A health crisis reveals the truth, and also brings Raini's companion of 35 years, Horst (Dan Hopman), to NYC. Raini leaves Katherine all of her work, including an unseen and unknown film reel. Joel (who turns out to be more of a pretentious selfish jerk than a loving and supportive boyfriend) wants her to destroy everything, but Katherine, knowing the woman behind the legend, is unable to do so.

Director Kurt Schwieckhardt notes in the playbill that there were two versions of the play, and they decided to combine the two. It kind of feels like that, and the play has the potential to be a great one with a bit more editing. As is, two things didn't work for me. One was the explanation of why Katherine is no longer in touch with her father, a story that didn't really fit with the overall story and isn't necessary. The other is the appearance in the second act of the ghost of Aunt Raini. While it's a great device to allow Raini to defend herself in her own words (and I was happy to see Maggie back onstage), it wasn't clear just who or what this ghost was supposed to be. She seemed to be the manifestation of Horst's words in defense of her, which is an intriguing idea, but in practice results in the two actors awkwardly staring at each other wordlessly while Aunt Raini speaks. I like the idea of a ghost Raini giving her side of the story, but wish it were incorporated in a way that was less awkward. Still, the cast does their best with it, and all four bring their characters to life in all their humanity and flaws, with a nice chemistry between them.

Michael Hoover's set is a wonderful representation of a clean and posh NYC apartment belonging to the owner of an art gallery. Photos and prints hang on the walls and sit on open shelves, with hanging empty frames hinting at more art. White draperies provide interesting background for the ghostly appearances.

While not (yet) a perfect play, Aunt Raini gave me plenty to think about in terms of the intersection of art and politics, and the committed performances by the entire cast make it engaging and interesting to watch. Continuing at the Highland Park Center Theater through November 20.