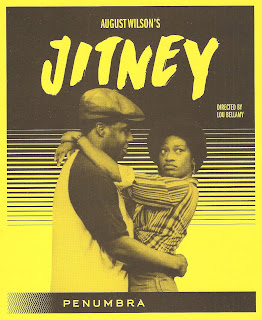 Jitney is the first play in the so-called "Century Cycle" that August Wilson wrote, but, set in the '70s, it's the 8th in the series chronologically. Each of the ten plays speaks to the African American experience (which I've learned at Penumbra Theatre is really the American experience) in one decade in the 20th Century. This is only the third Century play I've seen, after Ma Rainey's Black Bottom (set in the '20s) and Two Trains Running (the '60s) in 2011. I seem to recall that Penumbra planned to produce one of these plays every year, or maybe every other, but plans were derailed during their financial setback of 2012. I'm happy that they've returned to August Wilson's work during this, their 40th anniversary season. Penumbra has a long history with August Wilson, having produced his first professional play and more of his plays that any other theater. We are privileged to have Penumbra in our community, and I hope that they continue to do the Century plays until I've seen them all. August Wilson wrote such rich characters and specific experiences that speak to the universal truths of friends and family, love and heartbreak. And Penumbra's troupe of actors is experienced and quite brilliant in bringing these stories to life, as they do in Jitney.

About Ma Rainey's Black Bottom I wrote, "Much of the play is these four men talking and joking with each other. Their characters are so specific and interesting that it's a pleasure to listen to them go on about nothing, but also difficult at times when we catch glimpses of the pain that's behind it all." Even though I've only seen three, I'm pretty sure that can be said about all of August Wilson's plays. In Jitney, the men sit around talking and joking with each other at a jitney station where most of them work (think Uber for the 20th Century). They find out that the city is tearing the whole block down to make way for new buildings and houses, and must decide what they should do. Find a new location, join another station, or retire? Each of the men has their own personal struggles they're dealing with; one is trying to reconnect with his son who was just let out of prison after 20 years, one is an alcoholic, one is working two jobs to make money to buy a house for his family. Tragedy strikes, but life continues in this play that's a study of characters and relationships.

The excellent cast of Jitney includes many of the actors in the previous two August Wilson plays I've seen (Abdul Salaam El Razzac, James Craven, James T. Alfred, and Kevin D. West), and their experience with Wilson shows in how natural these characters and this language is in their hands. They're joined by more familiar faces (Darrick Mosley, Jasmine Hughes, and T Mychael Rambo) and Penumbra newcomer Marcus Naylor, and a return of one of Penumbra's founding members, Terry Bellamy. Together they form a strong ensemble. It's a lot of people to keep track of, constantly going out on "trips" and coming back, but the clearly written characters and specific performances help (as does the chalk board on which each character checks in and out).

Although Jitney is set in the '70s, these are older working class men who aren't necessarily up on the latest styles, and Mathew LeFebvre's mostly subdued costumes reflect that. Fortunately there a few young and showy characters that get to show off the '70s colors and silhouettes. Vicki Smith's scenic design is a realistic recreation of the jitney station workplace, complete with glass windows that show the street behind it.

Jitney continues at St. Paul's Penumbra Theatre through November 6. Don't miss this chance to see one of America's best playwrights of the 20th Century by the theater company that knows him best.