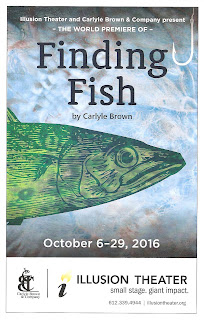 Did you know that there's a fishing crisis in New England? Being a vegetarian who never really liked to eat or catch fish, living in land-locked Minnesota, I've never heard about this issue. I've never even thought about how environmental issues affect those making their living off the sea. But I'm thinking about it now, thanks to Carlyle Brown's new play Finding Fish, now receiving its world premiere at Illusion Theater. Rather than just being a boring recitation of facts (like "from 1991 to 2003 the cod catch fell 99%," as noted in the thick program that has tons of information and resources about environmental issues, particularly those related to water), Finding Fish combines the realism of family drama with fantastical elements to create a story that's both thought-provoking and entertaining.

In a small coastal town in Maine, the fishing business has dried up. No one can make a living catching fish anymore, except for Peter. His brother Michael is a scientist who left home to study fish from a more objective perspective, but his brother and father Henry still live and breathe fishing. When Michael returns home to ask Peter to share his secret, he meets his new wife and lucky charm Fiona. It's obvious that Fiona is an odd duck - she likes to swim (and walk through the house) naked, and she rarely speaks except in staccato single words. She's a selkie (which I learned about from TLA's Ballad of the Pale Fisherman), that legend of a seal that turns into a woman when she sheds her skin, landed in the middle of this gritty real world. It's an interesting juxtaposition between science and fantasy, between the very real issues caused by climate change and the otherworldliness of this creature who suggests there may be other forces at work.

The realism and fantasy are both represented on stage. A realistic and rustic cabin is set on the left of the stage, but with half walls that make it look as if it was torn out of Maine and placed on stage. Between the cabin and dock on the right is a huge screen that displays images and videos of an ocean coast in daylight, fog, or sunset (set design by Dean Holzman).

A friend of mine mentioned she has a theater crush on one of the actors in the cast, but I have a theater crush on all of the actors in this cast! They are all among my favorites, and whenever I see any of their names on a cast list I know I'm in for a treat, so to see all four of them together is an extra special treat. Steve Hendrickson is a lovable grump as the patriarch of the family, full of regret but still wanting to keep his family together. Paul de Cordova and Bill McCallum are great as the brothers, opposite and with a prickly chemistry, but still the feeling of shared history. Although I'm not crazy about the fact that the only female character barely speaks, is frequently naked, and is basically being held against her will, Jennifer Blagen is incredible in the role. She manages to convey emotion with few or no words in a physical performance that's very seal-like.

Finding Fish is a wordy, talky play, and other reviews have said it comes off as a lecture (read my fellow Twin Cities Theater Bloggers' reviews here). Maybe that's why I enjoyed it more than other reviewers seemed to; as a math/science nerd, I like wordy talky lectures. I found the play to be thought-provoking and extremely well acted. See for yourself at Illusion Theater through October 29.