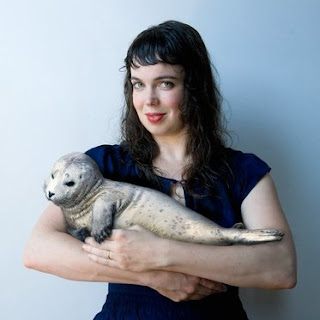 Devised physical theater company Transatlantic Love Affair won an Ivey in 2012 for Ballad of the Pale Fisherman, an original work based on the legend of the selkie, a seal who takes human form. I did not see that production (part of Illusion Theater's "Fresh Ink" series), having only "discovered" TLA shortly before their Ivey win through their Fringe show Ash Land. I saw it at the final "audience pick" show because it was the talk of the festival that year. Seeing TLA for the first time was one of the most moving theater experiences I've had, and I haven't missed a show since. I'm thrilled they're bringing back Ballad of the Pale Fisherman as part of the Southern's ARTshare program. Seeing it last night, it's obvious why it won the Ivey (but then, I would give them an Ivey for every one of their shows, and in fact the Twin Cities Theater Bloggers awarded them two "favorites" last year). No one casts a spell like Transatlantic Love Affair, as they tell a story and create an entire world with nothing but their bodies, voices, and souls. Ballad of the Pale Fisherman is an achingly beautiful and completely engrossing 75 minutes of storytelling.


Now comes the hard part - how to describe a Transatlantic Love Affair show? The seven barefoot simply clad ensemble members don't just play every character in the story, but they also embody every object of the physical environment and create all of the sounds. In this case, that means they are the waves of the sea, the residents of the fishing village both old and young, the seals playfully barking on the shore, the crying baby, the creak of the opening door, and everything else required to tell the story. Two other important elements of the storytelling are music (ensemble member Derek Lee Miller on accordion, setting the mood from playful to mournful) and lighting (designed by Mike Wangen, helping to define the world of the play). As the cast moves around the completely bare space at the Southern Theater accompanied by these two elements, the mind's eye begins to see the walls of the cottage, the cozy bar, the deck of the fishing boat. Such is the power of TLA to create a world of imagination, if you just believe and let yourself see it.

The show begins when an old man (Derek Lee Miller) sits down with his accordion and begins to tell a story, his story. We watch a boy grow into a man (Diogo Lopes) in this tiny island fishing village where everyone knows everyone, and the roles are clearly defined - the boys grow up to be fisherman, and the girls grow up to be their wives. He hears a story of the selkie, a seal who slips off her skin to become a beautiful woman, and one day he meets one (Emily King). Her skin is lost, so he brings her home to the village, where she learns the way of life and the villagers (Heather Bunch, Alex Hathaway, Adelin Phelps, and Allison Witham) learn to accept her as one of their own. After the fisherman and the selkie realize they love each other, marry, and have a baby, the selkie's skin is found, and a choice must be made. For even though she loves the fisherman and their baby, a part of her will always long for the sea, and she can never be whole and happy on land while it's calling to her.

Everyone in the ensemble (many of whom are TLA company members) is so wonderful at this sort of physical theater, and each one is worth watching at every moment of the show. I was particularly moved by Emily's elegant seal-like movements, Heather, Adelin, and Allison's dodderings as the sweet and funny little old ladies, and Derek's facial expressions as the old fisherman sits and watches his bittersweet story play out.

A simple story, beautifully and innovatively told. That's Transatlantic Love Affair - simple and profound. Ballad of the Pale Fisherman continues at the Southern Theater through June 17 (in rep with the also excellent but completely different Buried Child by Red Bird Theatre).