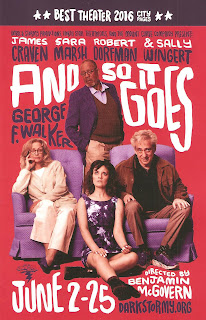 "If this isn't nice, I don't know what the hell is." This quote by American author Kurt Vonnegut is also a line in Canadian playwright George F. Walker's play And So It Goes, in which Vonnegut is a (ghostly) character. And it's a fine way to summarize the experience of watching Dark and Stormy's production of the play. The "this" in this case is a funny/tragic script brought to life by four of the Twin Cities best actors with an interesting and intimate staging in an unconventional space. It doesn't get much better than that, friends. And even though I've never read Vonnegut and don't know much about him (I was a math major), I do know theater, and this is great stuff.

And So It Goes is the story of a family struggling with mental illness and its devastating effects on everyone in the family. Previously happy and healthy daughter Karen becomes someone her family doesn't recognize and is diagnosed with schizophrenia, and ends up living on the streets, using drugs, and becoming involved in a violent altercation for which she is arrested. Her supportive parents Gwen and Ned do everything they know to help her, but they're struggling as well. Ned has lost his job as a financial adviser, they had to sell their home, and their car has been repossessed. The fourth member of the family, the son, is never seen and only briefly talked about, having left the family for unknown reasons. Gwen deals with her problems by talking to her favorite author Vonnegut who, despite being dead, is a great listener and dispenses useful advice. Soon Ned is visiting with him too (perhaps Karen inherited her illness from her parents). This isn't a happy ending kind of play, but still, there's perhaps reason to hope as the family stays together and attempts to navigate through this difficult time and out the other side.

I truly cannot imagine any better actors to play these roles than these four. Dark and Stormy's Artistic Director Sara Marsh is so heartbreaking as Karen. At times a seemingly normal and happy woman, and then immediately falling into despair or fear or anger. For one particularly devastating scene she was just a few feet away from me (more on the staging later), and it was almost painful to watch. As Gwen, the always wonderful Sally Wingert is so real and sympathetic as the mother who wants to make her daughter better and is frustrated that she can't. Completing the family is the endlessly watchable Robert Dorfman as Ned, a man who seems to be teetering on the edge of sanity himself. I don't know another actor who can break your heart while grinning from ear to ear. Last but not least, James Craven with his soothing voice is an excellent therapist, someone you want to tell all your problems to as he sits there thoughtfully listening and doling out advice.

During their first few years, Dark and Stormy was a nomadic company, performing at site-specific locations such as an actual office and an apartment complex party room. But they've recently settled down into their Artspace at Grain Belt Warehouse in Northeast Minneapolis, one of those great old buildings with good bones (and not such a great ventilation system). But even though this is their third production in the same space, it looks and feels like a different space every time. Director Benjamin McGovern had the ingenious idea to stage this play in a round despite, or perhaps because of, the large pillar in the center of the room. This creates a "lacuna" (no it doesn't mean "no worries for the rest of your days," it means "a blank space or missing part"). Depending on where you sit, some parts of the play will happen on the other side of the pillar. Rather than taking away from the experience, this actually works for the story, because no one can ever see everything that's happening, especially when what's happening is mental illness (and I was happy that one particularly emotional scene could only be heard and not seen; it was difficult enough just hearing it). Better yet, the characters acknowledge the pillar and use it - peeking around it or leaning against it. And with just two rows of chairs around the circle, and the actors often sitting in that circle, you get an up close view of the action. The show has a Ten Thousand Things feel, in that you're close enough to look at the actors' faces and see the emotion there, and they at times interact and play with the audience. This intense story is one you might not want to get that close too, but it makes the experience much more real than if it were staged in a traditional theater space.

Kudos to the entire production team for the simple but effective elements of lighting (Mary Shabatura), sound (Aaron Newman), modern and character appropriate costumes (Lisa Jones), and props (Katie Phillips) which were smoothly and seamlessly passed to the actors by the assistant stage managers (Rick Miller and Jack Tillman) sitting just outside the action. The whole thing is really well-choreographed and all the pieces come together beautifully.

And So It Goes continues through June 25, but seating is limited and shows have a tendency to sell out, so you'll want to get your tickets soon for this one. If you've never experienced Dark and Stormy before, this is a great introduction to their unique style - smart and darkly funny script, small cast of fantastic actors, simple but high-quality production elements, and an intimate theater experience.