"Le Switch" at the Jungle Theater 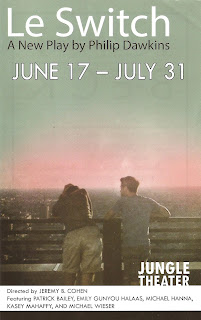 Two years ago I saw Philip Dawkins' one-act play Failure: A Love Story at the Minnesota Fringe Festival, and it was one of my favorite things I've ever seen at the Fringe. In fact I called it "everything I want in theater," a perfect blend of comedy and tragedy, with tons of heart (and it made me cry perhaps more than any other theater I've seen). At the time I didn't know who Philip Dawkins was, but now I know he's a Chicago-based playwright who is a core writer with the Playwrights' Center in Minneapolis. His name has come up again recently when his new play Charm (also a mix of comedy and tragedy with heart) was produced at Mixed Blood earlier this year. And now comes Le Switch, developed at the Playwrights' Center and having a rolling world premiere this year, including at the Jungle Theater. I'm happy to report that like Failure, it gave me all of the feels (although I only shed a few tears, not buckets, probably because there are no animals in this one). Like Failure, Le Switch is a funny and beautiful love story, but not just a romantic love story (although there is that, and a wonderful one). It's also a love story between a brother and a sister who are each other's only family; a love story between childhood best friends who, despite their differences, still love and support each other unconditionally; a love story between the main character and a man who was more of a father to him than his biological father ever was or could be. It's a fantastic new play and I'm excited to see where it goes next.

David is a gay man living in NYC who is the best man in his (also gay) best friend Zachary's wedding, shortly after marriage equality was passed there. There's just one problem - David doesn't believe in marriage. He and his twin sister Sarah promised each other they would never marry after watching their parents make a mess of it. David's roommate Frank and his recently deceased partner Danny never married and they were happy together for decades. And David has so long identified as someone outside the norms of society that he cannot imagine participating in anything so traditional as marriage. But now Sarah's in love, Zachary is married, and David meets a beautiful young man named Benoît on a trip to Montreal. Will he stay true to his own personal ban on marriage, or will he allow Benoît to lead him into this brave new world of marriage? Watching the joys and heartbreaks of David's journey is a true pleasure.

The title Le Switch has several meanings. Benoît is bilingual and David marvels at how easily he switches back and forth between the two languages. But it's also a switch of generations, as the story includes gay men of three very different generations (the Jungle includes a handy timeline of LGBTQ rights in the program). Frank is in his 50s and was around for the early days of the gay rights movement. 23-year-old Benoît really only knows a world of acceptance and equality. And David, in his 30s, is somewhere in between.

Director Jeremy B. Cohen (Artistic Director of the Playwrights' Center) has assembled a fantastic cast (several of whom also participated in the initial reading two years ago) and does beautiful work with them. I wondered why they brought in an actor from L.A. to play the role of David, until I saw the show and realized it's because Kasey Mahaffy is perfect for the role. So charming and funny and heartbreaking, he really brings out all the nuances of the emotions this character experiences over a period of a couple years. I hope to see Kasey back in Minneapolis again soon! Patrick Bailey and Emily Gunyou Halaas are always wonderful and so much fun to watch, as they are here as Frank and Sarah. I didn't think it was possible for Michael Hanna and his man-bun to get more dreamy (see this and this), but have him say romantic lines in a French accent, and he is. Who wouldn't fall in love with Benoît? Last but not least, new favorite Michael Wieser (see also The Normal Heart/Coriolanus) is just as cute as can be as the bridezilla Zachary. Most importantly this cast really works together well and makes the many love stories palpable; they feel like a family.

Kate Sutton-Johnson has proven to be an inventive scenic designer in her work with Theater Latte Da and the Jungle's last show Constellations, among many others. Here she has a designed a modern, versatile, and quick-changing set that ranges from a NYC apartment to a Montreal canal. Set pieces slide in and out of the scene on invisible tracks, and rotating panels on all three walls open to let in light or props or otherwise change the setting. Books and bookshelves are ever-present (two of the characters are librarians, or rather library scientists) and also serve as a mountain, which someone works. Barry Browning's lighting design also helps transport us from the apartment to the mountaintop.

Le Switch continues through the end of July so you have plenty of time to get to the Jungle and see this smart, funny, moving, lovely new play. In fact, it's one of my must-see shows of the summer (click here for the full list). It's a feel-good summer rom-com, but with a little more depth and significance than the usual rom-com.