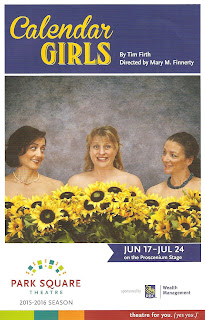 "This is my favorite kind of play because it celebrates how deliciously human we are while also revealing how incredibly generous we can be when one of our own is in need of hope." This quote from director Mary M. Finnerty perfectly sums up the spirit of Park Square Theatre's Calendar Girls, the play based on the movie based on the real life story of a group of average, every-day, extraordinary women who come together to support one of their own by taking their clothes off. How does getting naked, or rather nude, help their friend? The calendar they pose for and sell raises hundreds of thousands of dollars, er... pounds, for Leukemia and Lymphoma research, the disease that took her husband. The play based on this inspiring story is truly a feel-good summer comedy with tons of heart and sisterhood. You'll laugh, you'll squirm in your seat, you'll shed a few (or many) tears, and you'll fall in love with these women (both the characters and the incredibly talented actors who play them) as they embrace their womanhood and their strength, and each other.

A group of women in a village in Yorkshire gather regularly at the local church for WI* meetings. Wikipedia tells me that the Women's Institute is "a community-based organisation for women" with goals including "providing women with educational opportunities and the chance to build new skills, enabling them to take part in a wide variety of activities, campaigning on issues that matter to them and their communities." Which in this case means practicing Tai Chi, hosting speakers on the history of the tea towel, and of course, producing the annual calendar. The members include single mother Cora (Laurel Armstrong), flower shop owner and rebel Chris (Charity Jones), new widow Annie (Christina Baldwin), retired school teacher Jessie (Linda Kelsey), bored and buxom city slicker Celia (Carolyn Pool), and sweet and demure Ruth (Shanan Custer). This range of women all get something different from the WI, but mostly it's a place of support, companionship, and community as they navigate their lives. When Chris suggests they pose nude for a calendar to raise money in memory of Annie's beloved husband John (John Middleton), the women agree with varying degrees of reluctance. Despite disapproval from WI leadership, including the stern Marie (Julia Cook), the women persevere and are even more successful than they dreamed, discovering a newfound strength and love for one another in the process.

The entire 14-person ensemble cast (many of whom are women over 40 - hooray!) is fantastic, but I'm going to focus on the six women who fearlessly bare their bodies and souls in the telling of this story. Each one is perfectly suited to her role and truly brings out the individuality and personality of each character (and they even sing a little, led by Laurel with her lovely voice and piano accompaniment, with arrangement by Peter Vitale). The scene when the women drop their robes to pose for the photographer (played by the charming Ryan Colbert) is a definite highlight. And not just because of the humor of the strategically placed baked goods and teacups, but also because of the warmth, love, and support shown by these women for each other (both the characters and the actors). It's a truly joyous and celebratory experience.

Although the setting of the play changes, the set never does. All scenes are played in the church room where the WI meets, and we're transported to other locations with the help of lighting, projections, and imagination. Most notably, the hillside where the women plant sunflower scenes is strikingly achieved by an image of a field of sunflowers projected onto the walls of the church. The costumes look less like costumes and more like a real person's wardrobe, perfectly suited to the personality of each woman, even through a diverse array of LBDs. (Scenic design by Michael Hoover, lighting design by Michael P. Kittel, costume design by MaryBeth Gagner.)

This lovely and loving, funny and touching play was the perfect choice for the Twin Cities Theater Bloggers' first partnership with Park Square Theatre. We hosted a special event at the Sunday matinee. Prior to the show Executive Director Michael-jon Pease gave a short talk about how there used to be only two theater critics in town, and their word was law. But due to the decline of printed media and the rise of the internet, there are now a multitude of voices discussing Twin Cities Theater. One of the goals of TCTB is to engage the audience, build community, and provide a place for discussion of the amazing theater we're lucky enough to have in this town. After the show, our bloggers Carol of Minnesota Theater Love and Becki of Compendium were joined onstage by members of the cast for a post-show discussion. We had a great turnout of actors and audience, and a wonderful discussion of the show, theater in general, and theater commentary (I loved Charity's response to the question "do you read reviews?" - she does read them out of interest in people's perspectives, but she doesn't give them power over her or her performance). We hope to continue to partner with Park Square and other theaters in town to enrich the theater-going experience for all audience members.

In the meantime, get your ticket to see this joyful, heart-warming show, playing through July 24 (and one of my summer must-see shows). Someone said that the best emotion is laughter through tears. If you agree, Calendar Girls is definitely for you. (Discount tickets available on Goldstar).

*My friends at Minnesota Theater Love found this awesome article about the WI, highlighting the things that women can do and the power that we have when we band together.