A Broadway Romance: Laura Osnes and Santino Fontana in Concert at Orchestra Hall 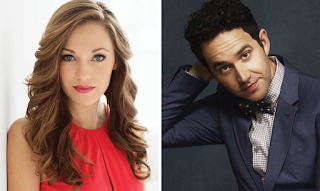 Laura Osnes and Santino Fontana are Tony-nominated Broadway/TV/Film stars who have roots right here in Minnesota. Laura grew up here and performed on many stages around town before finding fame through the reality show competition Grease: You're the One That I Want, which she won, thereby landing the role of Sandy in Grease on Broadway and beginning her successful career on the national stage. Santino graduated from the U of M/Guthrie BFA program and did several plays at the Guthrie, most notably playing the title role in Hamlet, the last play performed at the old Guthrie Theater before the new Guthrie opened in 2006. He also has since found his way to Broadway, film (as the voice of Hans in Frozen), and TV (in the brilliant CW music-comedy series Crazy Ex-Girlfriend which you should go watch right now if you haven't yet, Season 1 available on Netflix). Laura and Santino's Broadway paths crossed in 2013 when they co-starred in the 2013 production of Cinderella, for which they were both nominated for a Tony. Fitting then, that these two Minnesota actors and Broadway stars would reunite for a concert called A Broadway Romance, developed by Ted Sterling (himself a Tony-winner for the orchestration of the stunning Light in the Piazza). The three performed the concert Sunday night at Orchestra Hall, and it was a charming romance indeed.

Ted explained to the packed house that he arranged the concert like the stages of a romance, from the wishing prior to meeting, to the awkward first date, to marriage, children, and difficult times, to coming back together. Which is a clever idea, but mostly just a great excuse to sing many of our favorite musical theater love songs, both solos and duets. Highlights of the concert are many, but here are some of my favorite moments:

Laura Osnes and Santino Fontana are incredibly talented and I'm proud that they spent their formative years right here in Minnesota. I'm so grateful they returned for this concert, and I hope to see either or both of them return to do a full run of a show at one of our local theaters.