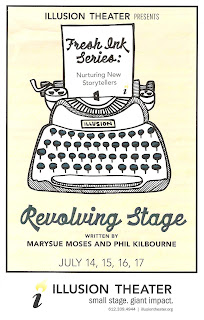 Every summer, Illusion Theater presents staged readings of new works in a program called "Fresh Ink." This year's selections include Revolving Stage, co-written by and celebrating the life of late Twin Cities actor Phil Kilbourne, and The Gest of Robin Hood, a new musical adaptation of the beloved and familiar tale. After a week or two of workshops with the creators and cast, each has four public performances, followed by discussions in which audience members give feedback on what they've seen, an important part of the new work development process. I was fortunate enough to see both shows, and both are and exciting and promising new works of which I hope to see more in the future.

Revolving Stage
Before local actor Phil Kilbourne died of melanoma in 2013, he was working on a one-man show about his life, career, and illness. In the years since, his wife, Marysue Moses, has continued to work on the project, turning it into a three-person show. Rather than a straight-forward narrative, it's an intriguingly fragmented narrative that includes memories and dreams interspersed with the stark reality of living with a terminal illness. From what the play portrays, Phil really was someone "living with living with living with not dying from disease." He continued to act as long as physically possible, and worked on this play even while experiencing memory problems and many physical issues. The play is as funny as it is poignant, and full of hope and life despite the grim topic. Garry Geiken portrayed Phil with dignity, humor, and heart, and Laura Esping and Jim Lichtsheidl donned many hats (literally and figuratively) as all of the other characters in the story (including Jim's spot on impersonations of local directors Bain Boehlke and Lou Bellamy). And for a "reading," the set and costuming was quite extensive and helped with the transitions of space and time. I believe I only saw Phil on stage once or twice, but the legacy he leaves is larger than any one performance, and this play is a wonderful testament to that.

The Gest of Robin Hood
"A collaboration between Tyler Michaels, Tyler Mills, and David Darrow. A new take on the legend of Robin Hood and his band of men with music inspired by the 15th Century Ballads of Robin Hood." They had me at Tyler, Tyler, and David (see also Jonah and the Whale and To the Moon). This show was just as lovely as I expected, with Tyler Mills' familar whimsical, lyrical, modern-day-fairy-tale language, David Darrow's evocative music that never fails to move me as it perfectly brings out the nuances of story and character, and hints at Tyler Michaels' physical expression of story and character to come in a full production. Read and sung by a cast of ten (including Riley McNutt as Robin, Garry Geiken as the Sheriff, Meghan Kriedler as Marian, and Max Wojtanowicz, doing most of the singing as the traditional "wandering mistril" Alan), plus one musician (Kristian Anderson) on guitar and other instruments, The Gest of Robin Hood offers a new look at an old tale. Or perhaps an old look at an old tale, drawing more on the original legends than the more recent romanticized versions. This is a world in which exile, thievery, and violence have consequences. Even though they read from scripts standing behind music stands, the cast beautifully brought the words, music, characters, and story to life, leaving only production elements to the imagination. The Tylers hope to do a full production of The Gest of Robin Hood next spring, launching their new theater company. In the meantime, you can see more of their work at the upcoming Minnesota Fringe Festival in an original piece called Lewis/Clark.