"Nice Work If You Can Get It" at Lyric Arts 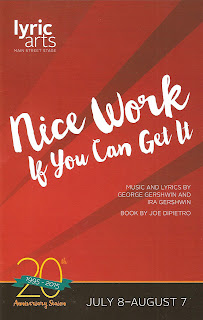 A jukebox musical featuring the songs of the Gershwin brothers (composer George and lyracist Ira) set in the bootlegging days of the 1920s. Sounds fun, right? And it is that. It's not what I want from Broadway (I prefer new original musicals), but it's a perfect fit for regional and community theater. Perhaps that's why I enjoyed Lyric Arts' production of Nice Work If You Can Get more than I remember enjoying the Broadway tour that came through town a few years ago. It's chock full of wonderful tunes, the 20-person cast is really strong from the leads through the ensemble, the set is cool, and the large offstage band sounds great. There's nothing deep or overly meaningful about the show, but it's a great good time.

Like most jukebox musicals in which a story is conjured up to fit the already written songs, the plot of Nice Work If You Can Get It is pretty silly, and really just an excuse to get the songs in. But it's entertaining enough, sort of a combination of Anything Goes and Guys and Dolls. Famous (female) bootlegger Billie Bendix meets wealthy playboy Jimmy Winter in 1920s New York. When she hears that he has a large house on Long Island that no one ever uses, she decides to stash 400 bottles of hooch in the cellar. But the next day, Jimmy shows up with his new bride Eileen, "the finest interpreter of modern dance." They assume that Billie's partner-in-crime Cookie McGee is the butler, because he has dressed in the butler's clothes in case the police come by (OK, sure). The obligatory crazy hijinks ensue when Jimmy's girls, Eileen's senator/reverend/judge father, his temperance advocate sister, and the cops show up. And of course, admidst all this, Billie and Jimmy fall in love.*

Highlights of the show include:
Nice Work If You Can Get It is the final show of Lyric Arts' 2015-2016 season, and continues through August 7. If you're in the Northern metro, it's definitely worth a visit to Anoka to see this fun, entertaining, and well-done musical. And then check out the exciting things they have planned for 2016-2017, from the classic musical Anything Goes to the hilarious new(ish) musical Urinetown.

*Plot summary borrowed from what I wrote about the touring production which stopped at the Ordway in 2014.