"The Palabras Project" by Other Tiger Productions at Park Square Theatre 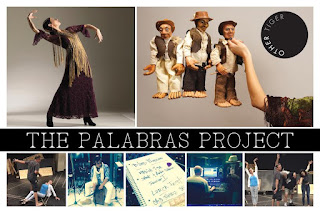 After spending the evening walking around the historic James J. Hill House on Summit Avenue watching theater, I spent the next night walking around the historic Hamm Building in downtown St. Paul watching theater. But unlike the comic opera wedding in The Marriage of Figaro, the wedding depicted in The Palabras* Project, based on Spanish playwright Frederico Garcia Lorca's 1932 tragedy Blood Wedding, is decidedly less happy. If "blood wedding" makes you think of Game of Throne's "red wedding," you're not far off. But this isn't a straight-forward adaptation of the play. New theater company Other Tiger Productions, founded by local theater artists Jessica Huang and Ricardo Vázquez with a mission "to pursue other forms, stories, and modes of collaboration in order to present an inclusive and global theater experience," has assembled a collection of short pieces around the theme of Blood Wedding. Incorporating music, dance, and puppetry, as well as theater, the pieces are performed in various locations in and around Park Square Theatre's basement Boss Stage, including hallways, lobbies, and rehearsal rooms. It's a truly unique experience that goes beyond theater, and a wonderful new (or old) form of storytelling.

The show begins inside the theater, where Ricardo gives a wonderful opening speech setting the stage and asking the audience to help him invite death into the space. But not in a scary way, in a respectful and celebratory way, acknowledging that death is a part of life (and very much a part of this wedding, the basic story of which is that the bride runs away from her groom and family with her ex-boyfriend Leonardo, the groom follows them into the woods, and the groom and Leonardo kill each other). After a theater/dance/music performance on the stage, the audience is split into groups and led around the theater by a guide. I was in Daveed's (aka Zach Garcia) group and we began in the backstage area, soon moving through hallways and into rooms. As is the case with these sort of things, there are occasional logistical issues that come from moving large groups of people in opposite directions around a space, but that's part of the experience of this piece. It's not the usual passive "sit in your seat and let it wash over you" kind of theater; it's "get up and walk around - see, smell, taste, experience" kind of theater.

I enjoyed all of the pieces, and it's really interesting to see the same story interpreted by different artists in different artforms. The more straight-forward scenes of the play are intriguing; I would love to see the entire play with Stephanie Bertumen as the bride, Zach Garcia as the groom, Elohim Peña as Leonardo, Audrey Park as his wife, and the rest of the cast of whom we only saw a brief glimpse. This is a full and complete experience of Blood Wedding, that somehow also left me wanting to see more of it.

Jessica and Ricardo have succeeded in their goal of creating "an inclusive and global theater experience." They've also succeeded in creating what was one of the most diverse audiences I've ever seen at the theater. There were people of many different races, speaking different languages, there were kids, teenagers, young adults, middle aged people, and senior citizens. It was really lovely to watch all these different people come together for a unique theatrical experience that all could enjoy. Only two more performances of The Palabras* Project remain, tonight and Sunday afternoon, so act fast to catch this multidisciplinary theatrical event.


*Google tells me that palabras means speech, which is something to contemplate.