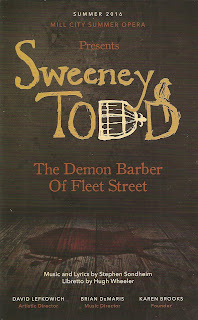 In just it's 5th season, Mill City Summer Opera has become hugely successful, with six sold-out performances of fantastic outdoor opera in the spectacular location that is the Ruin Courtyard at the Mill City Museum. And even though this year's selection, Stephen Sondheim's Sweeney Todd: The Demon Barber of Fleet Street, isn't technically an opera, it works beautifully performed by this 30+ member opera company (and orchestra of nearly that many) in this unique location. Only one performance remains, but tickets have been sold out for months, so watch their Facebook page in early 2017 for the announcement of next year's show, and get tickets early!

Sweeney Todd is a tale of vengeance and murder, as Sweeney returns to London after 15 years imprisonment for a crime he didn't commit, only to find his wife and daughter gone thanks to the very judge who put him away. His barber business turns deadly as he becomes intent on exacting revenge on those who wronged him. His partner in crime Mrs. Lovett finds a creative way to dispose of the bodies at her pie shop and the two take in the boy Toby, who's just happy to have a home, until he discovers what's really going on. Meanwhile, the young sailor Anthony has fallen in love with Sweeney's daughter Johanna and he and Sweeney team up to get her away from the evil judge. This isn't a happily ever after kind of story so don't expect things to end well, but it's deliciously chilling to watch it all play out.*

Mill City Summer Opera's production is on the opposite end of the scale from Theater Latte Da's beautifully stripped down production last year, which featured a cast of about a dozen and a four-piece orchestra. That was a sparse and gritty Sweeney, this is a full and lush Sweeney. Both takes work, and it's interesting to see two different interpretations of the same piece. In this production, the 30+ trained opera singers and an orchestra nearly that size (directed by Brian DeMaris, and managing to keep their instruments in tune in the 90 degree humid air) fill the courtyard with sound, bringing out the fullness in Sondheim's score. The leads are from the national opera scene, with a few familiar local faces in the ensemble. Robert Orth is a magnificent Sweeney, dark and powerful and yet somehow sympathetic. Catherine Cook brings humor and heart to the role of Mrs. Lovett, his partner in crime. Jeni Houser and Mackenzie Whitney are lovely as the young and naive lovers Johanna and Anthony, and David Blalock imbues Toby with childlike innocence and playfulness. Last but not least, Emily Pulley is truly creepy as the mysterious beggar woman, even as she walks through the crowd before the show begging "alms, alms, for the miserable woman!"

The set is perhaps the best match to location I've ever seen. The rusty copper of the stage and aged smokestack so perfectly match the Ruin Courtyard that it's difficult to know where the set ends and the courtyard begins. In fact, throughout the first act I thought that the smokestack on stage was part of the ruins that they worked into the set; it wasn't until smoke started rising out of it in the second act that I realized it was actually part of the set, just made to match the old smokestacks sitting on the side of the courtyard. Director David Lefkowich makes great use of the space, with entrances and exits on all sides of the courtyard.

I don't go to the opera very often, but whenever I do I'm impressed that the audience always looks good. Opera audiences seem to dress up more than theater audiences do, and I like that. I'm not saying you need to wear a cocktail dress or a suit and tie, but you also shouldn't wear the same outfit that you wear to go grocery shopping or mow the lawn. When you go out to the theater, put on something clean and nice, look smart, show some respect. (Lecture from your annoying auntie over.)

Mill City Summer Opera has given an operatic twist to one of Sondheim's best musical theater scores. With a huge and talented cast and orchestra, and a set that perfectly matches the spectacular space of the Ruin Courtyard, this Sweeney Todd is a dark and thrilling experience.