"The Marriage of Figaro" by Angels and Demons Entertainment at the James J. Hill House 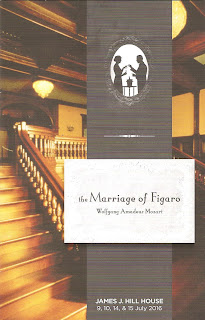 One of Mozart's most beloved operas, performed by nationally renowned opera singers and local favorites, set in the perfect and intimate location of the grand and beautiful James J. Hill House? I'm in! In by the skin of my teeth, that is. I consider myself very lucky to be one of the 140* people (4 shows x 35 audience members per show) to have had the wonderful experience that was Angels and Demons Entertainment's production of The Marriage of Figaro (with support from the Twin Cities Opera Guild). I'm not much of an opera-goer, unless it's made more accessible by companies like Skylark Opera (who always perform in English, and whose Summer Festival will hopefully return next year). But this was perhaps the most accessible and engaging opera I've ever attended. Sung in English in four different locations within the house that perfectly suited the story, it truly felt like I was in the midst of this crazy upstairs/downstairs story. I only regret that the audience was so limited, and I hope that they bring the production back sometime and expand it so that more people can know this truly lovely and special experience.

For those of you unfamiliar with the story (as I was), The Marriage of Figaro is about two servants, Figaro and Susanna, who are about to be married. Their wedding is threatened by the Count, who wants Susanna for himself and thinks he can have her, because he's the Count (gross). The Countess inexplicably still loves him, and partners with Susanna to trick him into returning to her. All kinds of shenanigans ensue leading to the eventual happy ending. It almost has a Gilbert and Sullivan feel with the hijinks, mistaken identities, weddings, and long-lost-mother bit. A nice article in the playbill (by dramaturg Barbara Belk) talks about the issues of class and gender explored in this seemingly light and fun comic opera, in which Susanna, a woman and a servant, is able to thwart the Count and happily marry her Figaro.

Each of the four acts of the play was performed in a different room in the house. We began on the third floor, in a tiny servant's room representing the soon-to-be-married couple's soon-to-be bedroom. The room was packed with people, a keyboard (music director Mary Jo Gothmann provided all of the musical accompaniment), and just a tiny space for the performers. It was sweltering, despite the cool July day, but the elegant wicker fans passed out before the show and the sheer joy and intimacy of the performances made up for any discomfort. For the second act we moved down one floor to a larger (and cooler) room, the Countess' bedroom (that was in fact once Mrs. Hill's bedroom). After intermission we returned to the first floor, with scenes in the great hall (perfect setting for the wedding) and the outdoor terrace overlooking the twinkling lights of downtown St. Paul the river and (no fans needed). Throughout the show there was a nice progression from smaller rooms to larger, from hotter to cooler, as the story unfolded around us. This is the third theater production I've seen in the James J. Hill House, which really is a wonderful setting for so many plays, but I've never seen the space used so ingeniously.

I was previously unfamiliar with the music of The Marriage of Figaro (except for the Overture, which I, and probably everyone, played in high school band). But even people who were familiar with the music have most likely never heard it like this before. My favorite way to listen to music, whether a concert or music-theater, is unamplified, and there is no need for amplification when you've got ten trained and experienced opera singers and a single musician in a small room with just 35 audience members. At times the audience is in the middle of the cast, with singers on either side of you, which really allows you to hear the different parts separately and appreciate how they fit together and play off each other. It's a wonderful way to experience an opera for the first time. And then there's the "all the lights on" factor, with the performers looking directly at the audience and singing right to us, making us feel like part of the show.

I can't say enough about this cast, all of whom not only have beautiful voices but also give fun, playful, heartfelt performances. There's nowhere to hide in that intimate setting, and the cast was always present and in the moment with us. Gabriel Preisser (co-founder of Angels and Demons) is a charming Figaro, and a master at playing with and to the audience. He has a wonderful match in Tess Altiveros as Susanna, sweet but feisty. Andrew Wilkowske makes the Count someone you love to hate, and Karin Wolverton anchors the comic piece in something real with her heartfelt portrayal of the wounded wife. Providing a bit of comic relief are Adriana Zabala as the always in love page boy Cherubino, and Victoria Vargas as as Figaro's suitor/mother. Rounding out the cast are Twin Cities favorites James Ramlet, Paul R. Coat, Quinn Shadko, and Jim Ahrens. Dressed in period clothing by Samantha Fromm Haddow and beautifully directed by Robert Neu (co-founder of Angels and Demons), this cast was a pure joy to watch and listen to.

In a time when there seem to be more theater companies in town than there are theater spaces to hold them, I love that companies are getting creative and using non-traditional spaces that are available. And there is no available space as grand and impressive as the James J. Hill House, and no production as perfectly suited to it as this accessible, engaging, fun, beautifully performed Figaro.

*Technically it was more than 140 people (4 shows x 35 audience members per show) because TCOG hosted a really wonderful program in which students could learn about the process of making the show and attend a dress rehearsal, for free.