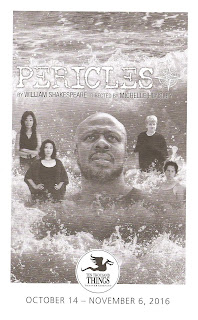 When I first saw Pericles, at the Guthrie earlier this year, I wrote, "I had a bit of a hard time with the play (as I often do the first time I see a Shakespeare play, unless Ten Thousand Things is doing it)." Lucky for me, Ten Thousand Things is doing it! And while I appreciated that production of Pericles, it didn't resonate with me the way that TTT's new production does, it didn't get inside me and make me feel for the characters and understand their plight. I should just give up seeing anybody else do Shakespeare, because no one does it like Ten Thousand Things. They make these 400-year-old plays so relevant and relatable and current, in a way that makes me love Shakespeare! The complicated plot of Pericles, filled with many characters and locations, is made simple through the use of smart editing, props, costumes, and most of all these eight incredible actors who make Shakespearean language sound so natural and easily understandable. Trust me, you've never seen Shakespeare quite like this.

Director and adapter Michelle Hensley has trimmed the play down to just over two hours, saying "I don't think most of us today want to sit and watch Shakespeare too much longer than that - at least I certainly don't" (I concur!). This is a great part of the success of how TTT does Shakespeare - focus on the story they want to tell, and cut away the rest that just gets in the way. Playwright in Residence Kira Obolensky has rewritten a few speeches at the end of the play to make it more woman-friendly, pointing out the injustices witnessed in the play and Pericles' failure to right them, and giving him a chance to make amends.*

After his wife dies, Prince Pericles embarks on a journey to many different lands in search of a new wife. After several adventures, he finds one in Thaisa. As they're sailing back to Pericles' home, she gives birth to Marina and apparently dies in childbirth. In his grief, Pericles gives his daughter away to be raised by friends, who do not treat her well. But Thaisa, whose body was thrown overboard, was really not sincerely dead, and she was nursed back to health when she washed up on shore and became a priestess of Diana, thinking that Pericles was dead and gone. The second act tells the long journey for this little family to be reunited, and Diana's scolding of Pericles that perhaps he made some wrong choices where they were concerned.

And now a word about this excellent cast. Karen Wiese-Thompson is a delight as the narrator Gower, clearly introducing the scenes and locations with the help of a pegboard displaying emblems of the kingdoms. She also plays a few other characters, quickly donning a hat, and in the end is revealed to be Diana herself! As Pericles, Ansa Akyea brings such heart and humanity to the role that you forgive him for throwing his wife overboard and abandoning his daughter. Everyone else in the cast nimbly navigates multiple roles, including Audrey Park as the good Thaisa; James Rodriguez and JuCoby Johnson as various statesman and servants; Maggie Chestovich as an abused daughter and an unforgiving mother; Pearce Bunting, both ominous and charming; and Tatiana Williams as the noble Marina. In typical TTT style they're all so clear in diction and expression, and playful with the audience.

I am obsessed with Trevor Bowen's costume design, almost to the point of distraction. I had to keep reminding myself to pay attention to the story when all I wanted to do was gaze at the costumes and take in every detail. He has deconstructed articles of clothing (shirts, jackets, jeans) and put them back together in ingenious ways to form a cohesive design that's so delightfully charming. A jacket made from white jeans, with long open sleeves also made from jeans with a painted design; a men's wool coat that has been ripped at the shoulders to reveal the padding, with sleeves added that look like they came from flowered jeans; helmets made from knitted hats with pieces added and sewn together; coats painted with bright or somber color-blocking, depending on the mood of the kingdom - each one more charming than the last. The best thing about these costumes is that they don't look realistic, they look like costumes put together in the best Project Runway challenge imaginable. Ten Thousand Things doesn't go for realism in design because of the constraints of their performance locations (which include prisons, community centers, and homeless shelters). Instead they go for playfulness in design that aids in the storytelling, and realism in the performances.

It's hard to describe if you've never seen a Ten Thousand Thing show, but somehow the simplicity of design and non-traditional theater space makes the story feel even more real. The actors create the characters and the world of the play strictly through their performances and interaction with the audience. This is all very obviously make-believe, but maybe because of that the audience works a little harder to join our imagination with theirs. I've never felt as vital a part of creating theater as I do sitting in the audience at a TTT show. And Shakespeare never feels as real and relevant and important as when TTT does it.

Pericles continues through November 6 with paid public performances at Open Book and the Guthrie's Dowling Studio, and free shows at various locations around town.


*For more on TTT's process and their approach to this play in particular, read this excellent interview with Artistic Director Michelle Henseley on MinnPost.