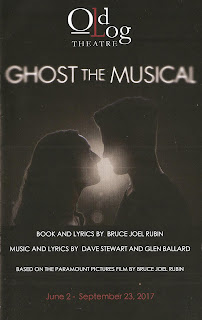 Old Log Theatre's contribution to the summer blockbuster musical is Ghost the Musical, based on the popular 1990 movie. It premiered on Broadway in 2012 and ran for only a few months, and when I saw the tour the following year I was not impressed. At the time I wrote, "At its core, Ghost is a small intimate love story, but Ghost the Musical is a big splashy techno-heavy 'show,' in which the beauty of that story gets lost. The story would be better served with less tricks, a smaller cast, fewer showy songs, and a greater focus on what we really care about - the relationship between Molly and Sam." I'm thrilled to report that Old Log has done just that. The score, which is quite good, the story, and the relationships between the characters are more the focus of the show, with lower tech effects that serve the story rather than drawing attention away from it. If you're looking for a satisfying summer musical experience, head out to Old Log Theatre, one of the oldest theaters in Minnesota, in lovely Excelsior on Lake Minnetonka.

For the few people unfamiliar with the movie, here's the story in a nutshell: artist Molly and banker Sam are blissfully in love, until one night they're mugged and Sam is killed. He becomes a ghost that for some reason cannot pass on. He soon discovers that there's more to his murder than a random robbery. The man who killed him is after something, and Molly is in danger. Sam finally finds someone who can hear him, the psychic Oda Mae, who reluctantly agrees to help Sam save Molly and bring his killer to justice.* Original Oscar-winning screenwriter Bruce Joel Rubin wrote the book and co-wrote the lyrics, so the musical hues pretty close to the original story with slight modifications necessary for the stage (which unfortunately means the cat that scares off the bad guy is cut).

First time director Eric Morris (most recently seen on the Old Log stage as Jerry Lee Lewis in Million Dollar Quartet) and his team have created a story that never stops, with a consistent emotional arc. As he said in the post-show talkback on the night I attended with my fellow Twin Cities Theater Bloggers, "we never want your heart to stop beating," and "musicals should never have blackouts in life ever." Scene transitions are cleverly accomplished in a way that keeps the story moving, with members of the ten-person ensemble (about half the size of the Broadway cast) moving set pieces in a way that's fluid and meaningful (movement designed by Christine O'Grady). Members of the ensemble are onstage for most scenes, standing silently watching the main action, representing the ghosts or spirits that may (or may not) be all around us.

I'm not impressed by super tech-heavy shows; that's not why I go to musical theater. The Broadway version of Ghost the Musical may have had more realistic-looking illusions, but I'll trade that for better storytelling every time. The ghostly illusions, while less fancy, are still impressive and accomplish the task. When a character dies and a ghost rises up, a body double (Nick Lande) remains on the floor to represent the soul separating from the body. Videos and projections are used smartly and sparingly, helping to set the scene in various NYC locations, or to show ghosts or spirits. The use of these effects is subtle and adds to the story rather than pulling focus away from it. The Brooklyn loft, Wall Street office, and other locations are represented by three rotating mobile panels, with a brick wall on one side and a paneled window on the other, that are moved into various configurations with images sometimes projected on them (scenic and lighting design by Erik Paulson, projection design by Miko Simmons).

And finally, the best part of the show - this wonderfully talented cast. As our leading couple, Mollie Fischer and Frank Moran create characters and a relationship you want to root for. For this story to work, you have to believe that Molly and Sam are connected to each other even after death, and you do. Frank portrays all the frustration and determination of a ghost trying to save the woman he left behind, and Mollie gives a beautifully raw portrayal of a woman consumed by grief, particularly in the song "With You" that left no dry eyes in the house. Mathias Becker has the look and charisma of a young Tony Goldwyn as the sleazy Carl, friend turned killer. It must be difficult to step into Whoopi Goldberg's Oscar-winning role of Oda Mae, but Heather McElrath does so with no hesitation and makes it her own. The other six members of the cast (Nik Whitcomb, Jake Cáceres, Emily Jansen, Caitlynn Daniels, Carl Schoenborn, and China Brickey) all do wonderful jobs playing all of the other characters and as the constant ghostly presence.

Two things that fans of the movie will insist on are both included in the musical - the song "Unchained Melody" and the pottery scene, although the latter plays out differently than it does in the movie. "Unchained Melody" is used in a clever way, with Sam jokingly singing it to Molly early in the show, and the reappearance of several phrases woven into the score later in the show.* The cast and seven-person off-stage band sound great under music director Kyle Picha (although I must point out that the sound mix was off when I saw the show, with the band at times overwhelming the cast, but it's an issue they're working to fix).

Old Log Theatre's regional premiere of Ghost the Musical is an example of a regional production that's better than the Broadway production, at least in this blogger's opinion. A fantastic cast, a promising directorial debut by Eric Morris, design elements that add to the story without overwhelming it, and a beautiful story about love, loss, and connection all add up to a great reason to visit Excelsior this summer. Visit Old Log's website for more information or to order tickets.

"The love inside, you take it with you."


*Some text borrowed from what I wrote about the tour three years ago.