"Arcadia" by The Chameleon Theatre Circle at the Ames Center 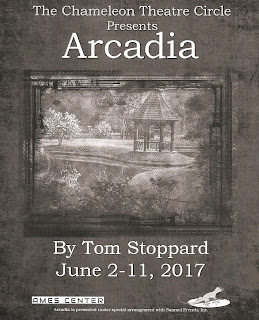 22 years, 5 months, and 5 days ago, I was a math major studying abroad in Salzburg, traveling around Europe during the winter break. While in London, my friend suggested we go see this play called Arcadia (she was a fan of the playwright Tom Stoppard because of his play Rosencrantz and Gildenstern Are Dead, which was made into a movie in 1990). We did, and I immediately and absolutely fell in love with it, so much so that the next day I bought the script from a bookstore (to date the only script that I own). I've only seen it twice since then - once at my alma mater a few years after I graduated, and once at Theatre in the Round 14 years ago. I re-read the play a few months ago in anticipation of Chameleon Theatre Circle's production this month, and was once again entranced by Stoppard's brilliantly clever mix of math, landscaping, poetry, romance, academics, and comedy. Last night, I was thrilled to watch it come alive before me in Chameleon's excellent production with a really wonderful cast, elegant design, and clear direction. It's quite a treat to revisit a play I fell in love with 22 years ago, and discover I love it even more now.

I recognize that Arcadia might not be the play for everyone. First, it's long. And while I'm the first person to complain if a show even begins to approach three hours, I make an exception for the brilliant Tom Stoppard, whose words I could listen to for twice that long. Also, here are many characters (several unseen) and two time periods to keep track of, related in unfolding and intricate ways. And it's a very talky play, basically a three-hour long debate about art, science, and philosophy. But that's exactly the kind of play I love. And the dialogue is so smart and witty, handled with aplomb by the cast of "amateurs" in this community theater production, that I found it absolutely delightful and completely engrossing.

The title of the play refers to the painting Et in Arcadia ego by Poissin (which I had just learned about in the Baroque Art History class I was taking in Salzburg), which is referred to and relevant to the themes of the play. The story begins in a country house in England in 1809. From there the past alternates with the present time and a group of academics studying what happened in 1809. And getting it comically wrong, of course, as happens when you only have a few pieces of paper and scribblings in the margins of books to go by. The central mystery is if the famous poet Lord Byron was there, and what he did there. The plot is too extensive and involved to get into here, but our main characters in the past are a precocious young girl named Thomasina Coverly, the daughter of the house, and her tutor Septimus Hodge, who discuss art, time, philosophy, and math (including Fermat's Last Theorem, which I had also just learned about shortly before seeing the play, and which was successfully proven shortly thereafter). Thomasina's mother is involved with a redesign of the garden, from neat and ordered English countryside to Gothic ruins, the age of enlightenment giving way to romanticism. There's also a poet, a critic of poetry, a tortoise, death by monkey bite, and carnal embrace (which as it turns out is not throwing one's arms around a side of beef). In the present, academics Hannah and Bernard, along with descendants of the Coverly family, have their theories about the goings-on of the day, and part of the fun for the audience is watching the historic events play out at the same time as the academics try to make sense of it, until it all comes together at the end and the two time periods overlap and exist at once.

The black box theater at the Ames Center has been converted into an in-the-round theater, with just a few rows of seating on each of the four sides of the square. This works remarkably well, with director Duck Washington's smart staging, although I had a little trouble at times understanding some of the actors when their back was to me. But for the most part the intricate story and fast and furious dialogue is clear, complete with entertaining and mostly spot-on accents from the cast (to my untrained ear).

Septimus Hodge is one of my favorite characters in theater, and Philip D. Henry has the wit, the charm, the accent, the hair, and the sideburns to pull it off. He's so enjoyable I found myself wishing for more Septimus. Mackenzie Diggins' Thomasina is sweet and innocent yet wise beyond her years. Andy Browers is an absolute hoot as the impatient academic Bernard, bringing a smile to my face every time he bounded on stage. Other highlights in this across the board strong 12-person (and one-tortoise) cast are Ariel Lief as the researcher Hannah who goes toe-to-toe with Bernard, Nick Menzhuber as the genial mathematician studying the changing populations of grouse, Matthew Stoffel as the dimwitted poet Chater, and Dawn Krosnowski as the deliciously haughty lady of the house. There's really not a weak link in this cast.

The elegant and simple design of the one room in which the entire play takes place includes a table in one corner, cluttered with 19th century and modern implements, a lecturn in the opposite corner, and doors out to the garden in a third corner. Sketches of mathematical equations, objects in nature, and people adorn the walls around the theater. The cast is dressed in yummy period costumes, gorgeous gowns for the women and three piece suits for the men, in contrast to the modern clothes of the present day characters (scenic design by Sadie Ward, costume design by CJ Mantel).

I like to say that Arcadia is my favorite math play, but I think it really is my favorite play, no qualifiers. Which is not surprising; the math major grew up to become a statistician and a theater blogger, so I live with the balance of science and art daily, and relish in the meeting of the two. I'm not sure why this play isn't done more often, maybe because it's long, with a large cast, packed dialogue, and complicated overlapping storylines and mysteries that need to come together in a precise way. Chameleon has done a beautiful job making all the pieces fit in an engaging and entertaining way.

In a series of cast interviews on their Facebook page, Chameleon asked the cast the question, "What impact do you hope this show will have on audiences." Their answers give you an idea what this play is about:

Andy Browers: "The world gets organized into dichotomies all the time--past and present, order and chaos, head and heart, that sort of thing. But, to me, the beauty of life is how it all gets marbled together. Arcadia is certainly a meditation on that, and it's inspiring to know that opposites not only attract but are often so close you can't even tell them apart. I love that. I hope others will, too."

Philip D. Henry: "This show has a lot to say about the difference between feelings and thought, and the need for a healthy balance between the two. It is a regrettably timely message, as I think it will always be; emotional appeals don't always need to conflict with the rational, but it is far too easy to pit them against each other."

Ariel Leaf: "I would like the audience to walk away realizing that there is not age or gender limit to intelligence, and not to get so wrapped up in what they believe as to deny all possible truths."


Finally, I'll leave you with my favorite quote from the play, which I underlined 22 years ago and am still intrigued by.

Septimus: No more you can, time must needs run backward, and since it will not, we must stir our way onward mixing as we go, disorder out of disorder into disorder until pink is complete, unchanging and unchangeable, and we are done with it for ever.

Chameleon Theatre Circle's Arcadia continues through June 11 at the Ames Center in Burnsville, and is well worth the drive south of the river.