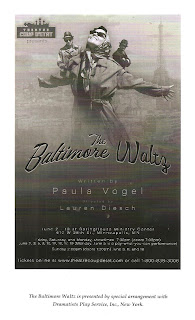 On a hot, sticky. busy, loud, crowded afternoon in Uptown (which is quickly becoming my least favorite neighborhood in which to see theater due to the never-ending traffic, construction, and parking difficulties), I found a cool, sweet, pleasing oasis in the SpringHouse Ministry Center. Theatre Coup D'Etat's production of the one-act 1990 Off-Broadway play The Baltimore Waltz is a funny, charming, poignant little waltz of a play. Playwright Paula Vogel wrote the play in response to her brother's death, and that sense of nostalgia, grief, and the ephemeral joy of life permeates every scene. The appealing three-person cast in the intimate setting sweep the audience up with them in this fantastical journey of the imagination.

The fictional brother (Nicholas Kaspari) and sister (Käri Nielson) go on a European adventure when one of them is diagnosed with a terminal illness, in search of a cure. Except that they never really leave the Baltimore hospital room, and the adventures are all in their imaginations. But everything in theater is in the imagination, so it feels as real as anything, until you notice that the only furniture is a hospital bed, and the makeshift props are things found in a hospital. But in their minds, Carl and Anna travel through France, Germany, and the Netherlands, meeting lots of interesting and weird people along the way (all played by Kip Dooley). Through it all they laugh, fight, reminisce, and reconnect, all the while knowing that their time is limited.

The three-person cast, directed by Lauren Diesch, are all so open and animated, looking the audience right in the eye as they confess their deepest secrets. The small thrust stage space, with just two rows of seats on three sides, makes the story feel immediate and intimate. The simple set utilizes hospital equipment in clever ways, namely the hospital beds and equipment, and even the costumes look vaguely like hospital gowns (set design by Meagan Kedrowski, costume design by Katie Martin). The whole thing feels like Anna and Carl putting on a play for themselves, which we get to be a part of.

The Baltimore Waltz is a small and intimate story, and a lovely little waltz of a play that's a beautiful tribute to the playwright's dearly departed brother (continuing through June 19).